When you write about mobile technology for a living, sometimes it helps to get out of the office for a bit to really put your gear to the test.

I don’t know of any better proving ground than the annual Consumer Electronics Show — every January I fly across the country to spend the better part of a week trekking around Las Vegas to see the latest computers, gadgets, and oddities and meet up with the folks who make them. And I need some reliable gear to do that… preferably gear that doesn’t take up a lot of space, doesn’t weigh very much, and can keep me working when WiFi hotspots or AC outlets are hard to find.

So in keeping with annual tradition, I figured I’d let you know what’ll be on my bag as I cover the show this year. 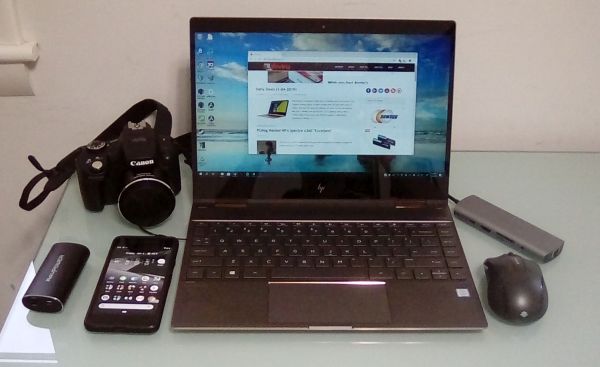 I’m starting off the new year with a new laptop. For the past few years my Acer Aspire S13 has been my companion both at work and on the road. But regular readers may recall that I’ve been complaining for a while that the keyboard on that laptop isn’t working as well as it once was.

During the holiday shopping season I actually picked up a Lenovo ThinkPad P1 mobile workstation, which offered impressive performance in a relatively compact design (for a 15.6 inch laptop anyway). But battery life was underwhelming, the notebook had issues maintaining a high-speed WiFi connection to my home network, and I encountered a bunch of BSOD crashes in the weeks after the laptop arrived.

So I decided to trade in some horsepower for reliability, longer battery life, and improved portability and picked up an HP Spectre x360 13t instead. As an added bonus, this laptop was more than $400 cheaper.

This 13.3 inch convertible weighs 2.8 pounds, measures about half an inch thick, offers at least twice the battery life of the ThinkPad P1 and… takes a lot longer to render audio and video projects. But it’s still an upgrade over my old Acer laptop.

It has two Thunderbolt 3 ports, a USB Type-A port, a fingerprint reader and an audio jack. The lack of a HDMI port is minor annoyance, but one that was fairly easily remedied: I recently purchased a USB-C hub with built-in HDMI, audio, Ethernet, and USB ports and SD and microSD card readers.

I opted for the entry-level configuration with a Core i5-8250U processor, 8GB of RAM and a 256GB SSD. I’m a little annoyed that the memory isn’t user upgradeable, but I couldn’t justify paying several hundred dollars more for a model with 16GB.

I’ve only been using the Spectre x360 for a little over a week, but so far I’m pretty happy with it. The only problem I have is that the backlit keyboard does not work.

Since the laptop is under warranty, HP has already sent me a box with a return shipping label and instructions for sending the computer in so the keyboard can be repaired. But I’m going to wait until after CES to actually do that since I need a reliable notebook for use on the go.

Like last year, I’m going to be counting on my smartphone for a lot of things

For the most part I’ve found I can snap better pictures using my Pixel 2 than I can with my Canon PowerShot SX50 camera so I plan to use my phone as my primary camera for still images again this year.

As an added benefit, whenever I connect to WiFi, the phone will automatically back up photos to Google Photos.

The phone is also my calendar, communication system, and navigation assistant to help me get where I’m going as I run from meeting to meeting and show room to show room.

I can also use the phone as a mobile hotspot for my laptop when WiFi isn’t available. I’ve found this to be less and less of an issue in recent years — I tend to skip most CES-related press conferences rather than wait in long lines for short announcements, and WiFi and Ethernet access is available in many locations. But it’s nice to have the option of tethering my laptop.

As a Google Fi customer, I don’t pay extra for tethering… but I do pay for every bit of data I use (up to 6GB, after which Google waives additional fees). So I’ll use this capability sparingly if I can… but with Google’s updated pricing, it’s nice to know that my bill shouldn’t go too high if I end up using more mobile data than planned.

This camera has been relegated to video duties ever since I picked up the Pixel 2. It features optical image stabilization, a decent image sensor, and support for recording up to 15 minutes of video at a time at 1080p/30fps.

I’d like to leave this camera at home since it adds a bit of bulk and weight to my bag. But unfortunately the Pixel 2 isn’t up to snuff when it comes to video recording — optical image stabliziation crops the image in a way that makes it hard to get up close and personal with the gadgets I’m checking out, and the audio quality is pretty lousy.

It’s also nice to know that if my phone battery dies or I have other problems with the Pixel 2, I can always switch to the Canon for still photos. And if I do find myself at a press event or another situation where I’m seated far from the action, the camera’s 50X optical zoom may come in handy.

The HP Spectre x360 has a touchscreen and a decent touchpad, but for me nothing replaces a mouse. The Microsoft Mobile Mouse 4000 is relatively compact and I’ve been using it ever since I dropped and broke my last wireless mouse (there’s a reason I don’t spend a lot of money on these things).

My Pixel 2 gets acceptable battery life under normal conditions. I can usually go all day without charging it. But the battery runs down pretty quickly when you start using it to snap dozens of photos at a time, so a portable charger is a must-have.

While I expect to be extraordinarily busy once I hit the ground in Las Vegas, I like to catch up on my reading and maybe watch a movie or two on the airplane.

I plan to leave my Amazon Fire HD 8 behind this year, since my new laptop is also a tablet. But I’m also going to try a different set of headphones. The Samsung Level-On wireless noise-canceling headphones I took with me in 2018 sound great, but they pinch my ears and can be uncomfortable to wear for more than an hour or two at a time.

I’m less impressed with the audio quality of the Cowin E7 wireless noise-canceling headphones (they’re way too bass-heavy for my tastes), but they are much more comfortable to wear.