Chnese company Boyue Technology makes a line of eReaders featuring E Ink displays ranging in size from 6.7  to 10.3 inches. But the upcoming Boyue Likebook Mars almost seems more like an Android tablet than an eReader.

It features a Rockchip RK3368 octa-core, 64-bit processor, which kind of seems like overkill for a device that’s designed primarily for reading eBooks. But as Boyue’s teaser video shows, tat’s not all this device can do.

Update: The Likebook Mars is now available for purchase from Amazon for $259. 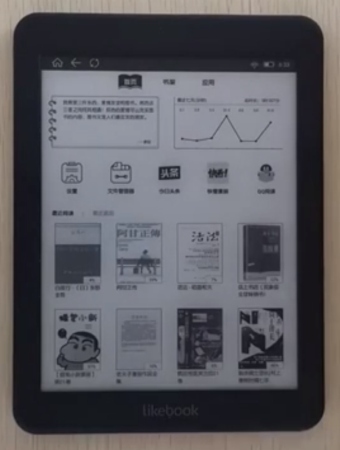 The video shows a bunch of third-party apps installed on the device. Most seem to be reading-related, including OverDrive, Nook, Goodreads, Google Play Books, Amazon Kindle, Audible, Adobe Acrobat, FBReader, and other apps and services for eBooks and audiobooks.

But the Google Play Store is also installed, which means that you should be able to install web browsers, news apps, or anything else you think might be usable on a device with a grayscale display and a low screen refresh rate.

Here’s a run-down of the specs we know about so far:

The device runs “Likebook OS” software, which seems to be a modified version of Google Android.

Update: The Digital Reader reports that the operating system is based on Android 6.0.1. It also looks like a rabranded Boyue Likebook Mars will be sold for 268 Euros in Europe as the Illumina XL6.