Priced at $250, the Bowers & Wilkins PI5 earbuds are about the same price as a pair of Apple AirPods Pro, which is to say expensive, but not to an unprecedented degree.

The new Bowers & Wilkins PI7 earbuds, meanwhile, sell for $400, which makes them some of the priciest around. They do have hardware that should deliver better audio quality for music and phone calls, and I’m sure they sound very nice. But the feature that stood out most to me is one I’d like to see become more common: you can use the charging case as a Bluetooth transmitter, which means it lets you use your wireless earbuds with wired audio gear. 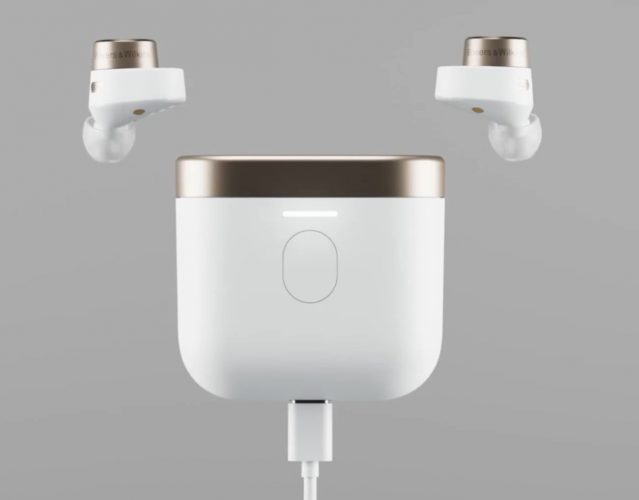 Like most similar devices, the PI7 earbuds come with a charging case that lets you recharge by dropping the left and right buds into the case. The case supports wireless charging, which means you can drop it on a Qi charging pad to recharge the battery in the case itself. But there’s also a USB-C port on the bottom that lets you charge the case by plugging it into a USB-C charging adapter.

What’s unusual is that you can also connect a USB-C to 3.5mm audio adapter to that ports, allowing you to plug the case into pretty much any audio device with a headphone jack. It’ll then work as a Bluetooth audio transmitter to send tunes to your earbuds.

That means you can use the earbuds + case with your old iPod or MP3 player, most TVs or PCs, and even airplane entertainment systems.

Bluetooth audio transmitters have been around for years, and they’re not particularly expensive – you can pick one up from Amazon for $15 to $30. But the Bowers & Wilkins PI7 earbuds are the first I’ve seen to come with a charging case that features the technology. Hopefully we see the idea make its way to more affordable devices in the future for folks that don’t want to spend $400.