The MK802 mini PC is a tiny computer (or TV stick) about the size of a USB flash drive. It ships with Google Android software, but we’ve seen Ubuntu, Puppy, Fedora, and other Linux-based software ported to run on the little PC.

Now you can add Bodhi Linux to the list. 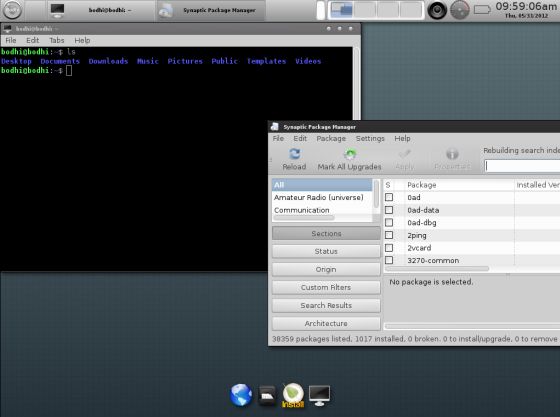 Bodhi developer Jeff Hoogland has released the first image of Bodhi Linux for the MK802. You can write the disk image to a microSD card, insert the card and plug in the MK802 to boot it up into Bodhi. Pop out the microSD card and reboot, and you’ll be running Android.

If you’re using a Linux computer to prepare the SD card, you can just DD the .img file. You should also be able to prepare the card from a Windows computer using Win3DiskImager.

Out of the box, the initial release of Bodhi for the MK802 includes a Linux 3.0 kernel and support for OpenGL graphics. It’s designed to work with 1920 x 1080 pixel displays, but you can modify the script.bin file to work with a 720p display as well.

This isn’t the first time we’ve seen Bodhi running on an ARM-based computer. It also supports the $249 Samsung Chromebook, Raspberri Pi, and other devices. But this is the first time Bodhi has been ported to work with a mini-PC featuring an Allwinner A10 ARM Cortex-A8 processor.

The MK802 was one of the first Android mini PCs to hit the market, and while it’s certainly not the most powerful device in this category, it remains one of the most Linux-friendly options.

You can also pick up first-generation MK802 sticks dirt cheap these days, with Amazon offering new and used models for as little as $35