Barnes & Noble appears to be reversing a decision to stop making color NOOK tablets like the NOOK HD and NOOK HD+.

The company has been offering affordable tablets with an Android-based operating system and a focus on apps for reading digital content from the B&N store for the past few years — but the NOOK lineup hasn’t had the same kind of success as Amazon’s Kindle Fire tablets.

In June the company announced plans to discontinue its NOOK tablet line while continuing to produce NOOK eReaders with black and white displays. The idea was to partner with other device makers to continue offering tablets at retail locations. But now the company says it “intends to continue to design and develop cutting-edge NOOK black and white and color devices.” 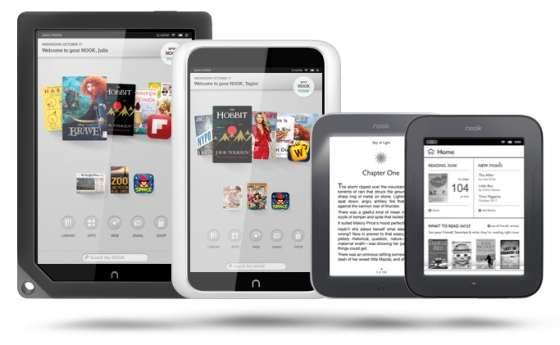 In a conference call today, B&N officials clarified that while they may partner with other companies to actually build upcoming color NOOK tablets, but that B&N plans to design and develop the devices in-house.

According to the new NOOK CEO Mike Mike Huseby, many people misinterpreted what the company meant when it mentioned a possible partnership model in June — although one has to wonder why it’s taken nearly two months to clarify the point.

The “clarification” comes after the departure of former CEO William Lynch… and it’s part of a footnote in the company’s latest earnings report. Incidentally, the report contains pretty lousy news — revenues are down 20 percent from last year.

B&N places partial blame on the lack of a blockbuster book series such as The Hunger Games or 50 Shades trilogies. But the company also clearly faces pretty strict competition as it tries to straddle the line between offering physical books in retail stores and digital books which can be read on eReaders and tablets.

It’s not clear if we’ll see a new NOOK tablet this year, but the company says at least one new NOOK device will be launched before the holiday season.

Pretty much every member of the NOOK family has received a price cut in the past few months. That’s at least partially a response to supply and demand — the company thought there’d be more demand, and produced an awful lot of devices which weren’t selling very well… at least until the price drops.

But since the company appears to be cleaning out inventory of all of its eReader and tablets, it’s hard to predict which one will be replaced with a new model this year. My money would be on a new NOOK Simple Touch, possibly with a higher-resolution display.

Since the company seems to have changed direction on tablets sometime in the past two months, it seems unlikely (but still possible) that we’ll see a new Android tablet in the next few months.