It’s official. Barnes & Noble will be one of the first companies to offer an E Ink eBook reader with a front-lit screen for reading in the dark, eliminating the need for a book light.

The NOOK Simple Touch with GlowLight is available for pre-order now for $139. It will be available in stores on May 1st. 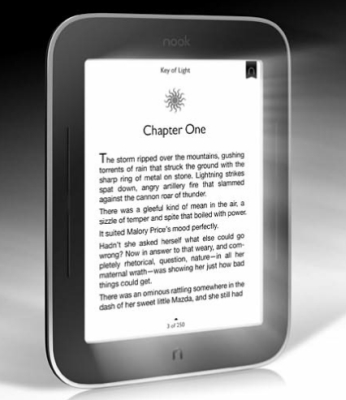 The announcement comes just a day after news leaked that B&N would be launching an illuminated eReader. Amazon is also rumored to be working on a new Kindle eReader with a front-lit screen.

Barnes & Noble says its GlowLight display will distribute light evenly across the screen. You can turn off the light when you’re not using it so you can save energy and use the NOOK Touch with ambient light only.

Aside from the new light, the new model is nearly identical to last year’s NOOK Simple Touch. Both devices measure 6.5″ x 5″ x 0.47″ and feature 2GB of internal storage plus a microSD card slot for extra storage space.

With the GlowLight turned off, the new eReader gets up to 2 months of reading time, just like the original. You can cut that in half with the light turned on.

But somehow despite the fact that the new model has one more feature than the original NOOK Touch, it’s actually a little lighter. The original $99 model weighs 7.48 ounces, while the new NOOK Simple Touch with GlowLight weighs 6.95 ounces.