Two years after launching a $50 Android tablet with a 7 inch display, Barnes & Noble is back with a new model.

The 2018 NOOK 7″ Tablet is now available from B&N online and in stores for $50. For the most part the new model looks identical to its predecessor, but the 2018 model does have twice as much storage. 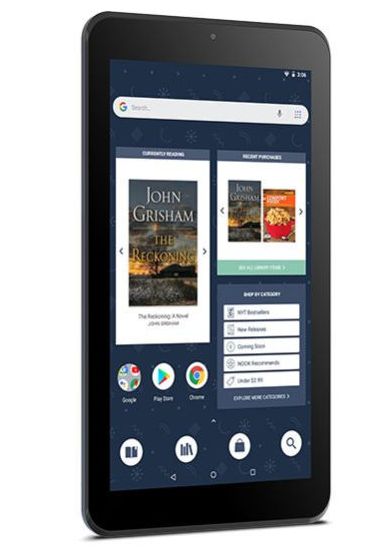 Other features include a 3.5mm headphone jack, a micro USB 2.0 port, a 2MP rear camera, and a VGA front-facing camera.

Clearly this isn’t the only $50 tablet on the market — it competes with Amazon’s entry-level Fire tablet which also has a 7 inch, 1024 x 600 pixel display. But the NOOK 7″ Tablet has a few things going for it.

First, it ships with something closer to stock Android software, complete with access to the Google Play Store. Second, the $50 price tag doesn’t include ads on the lock screen that you have to pay to remove. Third, you can get in-store support by visiting a Barnes & Noble store. And now there’s a fourth advantage — the NOOK 7″ tablet has twice as much built-in storage as an entry-level Fire tablet.

That said, Amazon has a more complete family of tablets than B&N. While the bookseller recently launched a $130 tablet with a 10.1 inch display, Barnes & Noble doesn’t have anything to compete with Amazon’s $80 Fire HD 8 tablet or the company’s Kids Edition range of devices.