As expected, Barnes & Noble is adding another Samsung tablet to its line of co-branded Galaxy Tab NOOK tablets.

The Samsung Galaxy Tab E NOOK is an Android tablet with a 9.6 inch display and a $250 price tag. 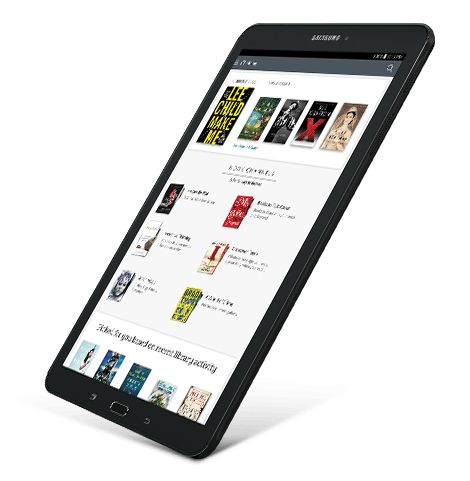 That makes the new tablet the largest model B&N sells, but it’s actually a mid-range model in terms of price. The company continues to sell the 7 inch Galaxy Tab 4 NOOK budget model for $150 and the premium Galaxy Tab S2 NOOK for $400.

Other features include 5MP rear and 2MP front-facing cameras, stereo speakers, GPS, and WiFi. The tablet has a Qualcomm Snapdragon 410 quad-core processor.

I guess the new Samsung Galaxy Tab E NOOK is designed to appeal to folks who might have been considering the 7 inch model, but wanted a bigger screen and longer battery life, but who don’t care much about screen resolution (since both tablets have 1280 x 800 pixel displays). The larger model also has twice as much storage space and features a newer processor.

The tablet weighs about 1.2 pounds, which makes it a lot heavier than the other Samsung tablets B&N sells (the 7 inch model is 9.7 ounces, while the 8 inch version is 9.4 ounces). And the 8 inch Galaxy Tab S2 NOOK has a faster octa-core processor and a higher-resolution 2048 x 1536 pixel display. But it’s smaller and more expensive.

Like all of the Samsung tablets B&N sells, the Galaxy Tab E NOOK runs Google Android software, but also comes with some Barnes & Noble features including the NOOK eReader and store apps, free NOOK Cloud storage, and support for free WiFi use at Barnes & Noble stores (as well as support for reading NOOK books for free when you’re connected to a B&N store WiFi network).