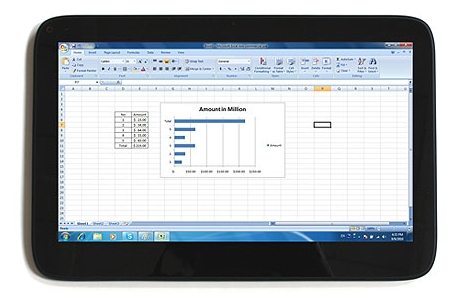 A company called bModo has announced it will start taking pre-orders for an 11.6 inch slate PC running Windows 7 later this month. If the bModo12 computer looks familiar, there’s a good reason for that. It appears to be based on the same OEM machine as the Neofonie WeTab, the ExoPC, and the Pioneer DreamBook ePad L11.

Liek those other computers, the bModo12 has a 1366 x 768 pixel glossy capacitive touchscreen display and a 1.66GHz Intel Atom N450 processor. It has 2 USB ports, an HDMI port, SD card reader, and SIM card slot. The computers comes with 802.11b/g/n WiFi, Bluetooth 2.1, GPS, a 3G modem, a 1.3MP camera and an accelerometer. It also has a Broadcom HD video accelerator.

The version bModo is selling comes with Windows 7 Home Premium, 1GB of memory, and a 32GB solid state disk. It has a 4800mAh battery which bModo says should be good for up to 5 hours of run time. It weighs just under 2.2 pound.

There’s no word on price, but the company plans to start taking pre-orders in the US, with shipping expected to begin in December.