One of the things that sets Android apart from some other smartphone operating systems is the fact that you can interact with many apps without leaving your home screen thanks to support for interactive widgets. If you use the Google Now launcher, you can even swipe from the left of your home screen to view Google Now data including weather forecasts, calendar appointments, sports scores, and much more.

Now the developers of popular Twitter and SMS apps Talon and EvolveSMS have released a free app launcher called Blur that takes Google’s idea and goes a step further. Swipe from the left side of the screen and instead of just viewing data from Google Now, you can interact with “pages” for any supported app.

For instance the Talon and EvolveSMS pages let you access your Twitter feed or send or receive text messages without actually launching those individual apps. 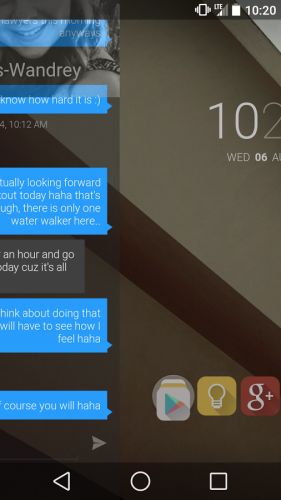 Right now the only app pages available for Blur are those that have been developed by the developers at Klinker apps. But they’ve released an API that will let other developers create pages for their Android apps. There’s also an “Info Page” which shows Google Now-like data, and developers can create cards that will show up in that page.

You can set up multiple pages so that you can access data from different apps by swiping through them.

In other words, Blur has the potential to do for the Android home screen what DashClock did for the lock screen: encourage the creation of an ecosystem that lets users customize their device so they can perform actions or view data without launching individual apps.

For now the launcher is probably most useful for people who already use other apps from Klinker… although the basic app launcher already offers many more features than the Google Now launcher, including support for custom icon packs, the ability to resize the app grid, show unread counts on the icons for certain apps (with an experimental add-on), and more.