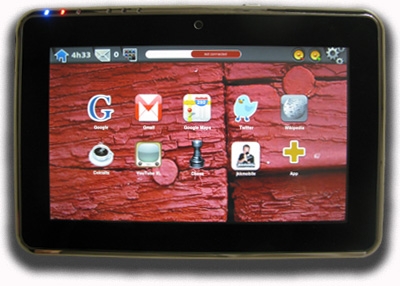 Now that Michael Arrington’s $200 CrunchPad has been turned into the $499 JooJoo, you may be looking for another way to get your hands on a low cost, easy to use web-tablet. Blump’it has an interesting solution: A Firefox plugin that essentially turns any existing tablet into a JooJoo-like device.

The Blump’it plugin basically adds an on-screen keyboard, touch-friendly gesture support, and a widget engine to Firefox so that you can run weather, email, news, and photo applications. There are also games and other so-called BlumpsApps available for installation.

Eventually there will also be a plugin for Google Chrome, but right now Blump’it is Firefox-only. Of course, that’s setting the bar pretty low, since pretty much any Mac, Windows, or Linux netbook can run Firefox. That means if you have a touchscreen netbook (or if you throw your own touchscreen into an existing netbook), you can run Blump’it. Of course, if you want a tablet, you’re going to need to perform some fairly serious surgery on your netbook. But it’s not like you’d be the first person to turn a netbook into a tablet.

The Blump’it project started out as the iFrame prototype we spotted way back in January, 2009. In addition to making a free Firefox plugin available, Blump’it plans to sell its own tablets soon, although there’s no word on pricing or specs.

You can check out a demo video, courtesy of TechVideoBlog after the break.

Update: The Blump’it tablet is currently in testing, but if you’re interested in buying one you can send the company an email. It’s a 10 inch tablet with an Atom processor, Linux, and a 2.5 hour battery.