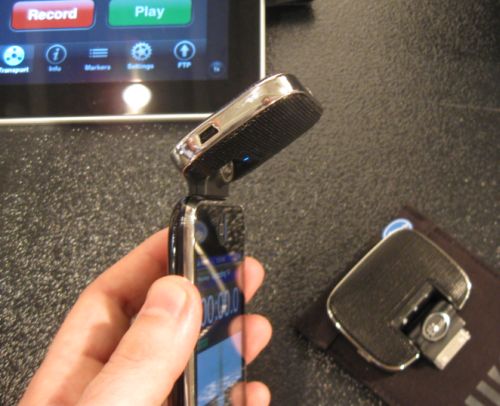 Blue makes a nice line of microphones for PC, Mac, and iPhone. I got a chance to check out some of the company’s latest products this week, and there are a few interesting new models in the pipeline.

First up is a second generation Blue Mikey for the iPhone and iPod touch. The new model features a 7-angel adjustable design which makes it easy to pick up a wide array of sounds. There are also 3 different gain levels, which you can adjust with a hardware switch. There’s also a mini-USB port for charging while recording — although that’s pretty much all the port is good for.

The mic works with the included digital audio recording software, or pretty much any other app that lets you record audio.

The Blue Mikey has a frequency response of between 35Hz and 20kHz, and can capture 16 bit, 44.1kHz audio. It’s due out August 20th, with an MSRP price of $99, although it will probably have a street price closer to $79.

Interestingly, this particular model will not work on the iPad or iPhone 4. Apple has changed the way peripherals connect and Blue is working on a new model for those devices, but hasn’t announced a release date yet.

But the company did manager to show off a way to use some of its other mics with an iPad. Because the optional USB camera connection kit allows you to plug in a USB microphone or headset, Blue had a demo set up showing a Yeti mic plugged into an iPad allowing you to record high quality, 16 bit, 48kHz audio using an iPad.