When you think of Android, you probably think of smartphones, tablets, or maybe even smart TVs. But while Google doesn’t officially offer a version of Android for laptop or desktop computers, independent developers have been porting the OS to run on those platforms for years.

And now one of those development teams is getting ready to bring Android 11 to computers with Intel or AMD chips.

Bliss OS is an Android-based operating system designed to run on devices with x86 processors, and the developers are getting ready to release a new version based on the latest version of Google’s operating system. 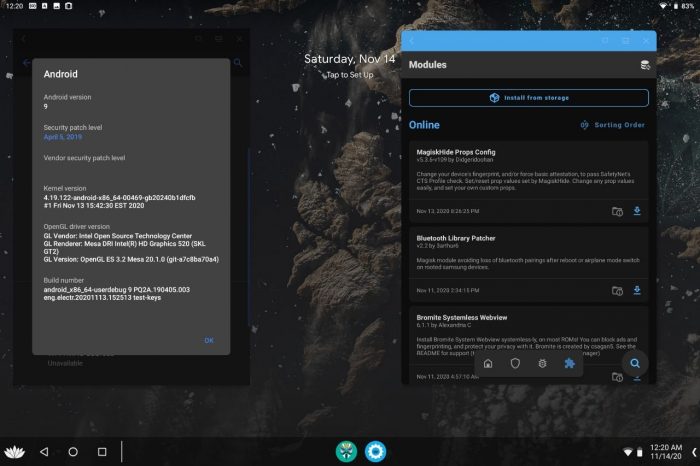 You can already download a recent build of Bliss OS 14 alpha from the project’s SourceForge page, or check out some notes on the upcoming release from one of tis developers at the xda-developers forum.

But in a nutshell, not only is Bliss OS updating its base to Android 11, but the team has also borrowed a feature from Chrome OS that allows Android apps that have been compiled to run on devices with ARM-based processors to work on systems with x86 chips.

Most ARM64 apps are said to work, as well as many armeabi-v7a apps… although some apps may still not work properly.

The operating system also supports Magisk, a tool that allows users to control root access and modify Android features and settings with add-on modules, and Gearlock, a utility for managing kernels, graphics, and other elements of an operating system through extensions.

On a less geeky level, while Android is designed to run on small touchscreen devices including smartphones and tablets, Bliss OS makes the operating system feel at home on desktop and laptop computers via a custom launcher that looks a bit more like Chrome OS or Windows thanks to a taskbar/dock across the bottom of the screen and Android navigation buttons in the bottom left corner.

While Bliss OS isn’t the only project that brings Android 11 to PCs, it’s much more actively developed these days than the granddaddy of them all: the Android-x86 project hasn’t seen a major release since May, and the latest stable builds are based on Android 7.1 (although there are release candidates based on Android 9.0).