Well that apparently didn’t work. In late 2011, BlackBerry launched BBM Music (back when the company was called BBM Music). Now BlackBerry has announced it will shut down the service June 2nd. 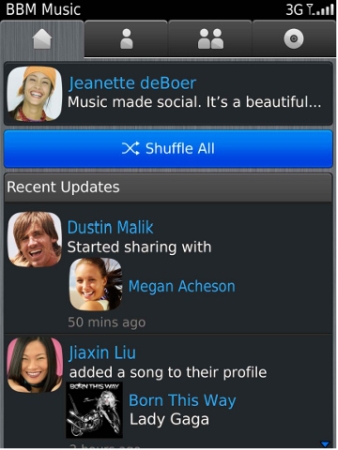 BBM Music is a subscription-based music service much like Spotify or Rdio. But it’s has a social element which makes it very, very odd.

The good news is that a monthly subscription runs just $5 per month, or about half the price other services charge.

The weird news is that subscribers only get stream a collection of 50 songs… unless they have friends that are also using BBM music. That’s because you can listen to all of your friend’s music. Have 10 friends? Then you get 550 songs.

It’s basically a pyramid scheme applied to music streaming. But when competitors offer an all-you-can-stream buffet with a collection of millions of songs to choose from, the BBM Music approach just seems bizarre.

So it probably shouldn’t come as a huge surprise that BlackBerry is pulling the plug, which means BBM Music won’t be making the jump to BB10.