One of the most bewildering things about the BlackBerry PlayBook tablet is that Research in Motion launched the device earlier this year without its own native email, calendar, or contact applications. The idea was that you could pair the tablet with your BlackBerry smartphone and view your BB calendar, contacts, and email — but that meant that if you don’t own a BlackBerry phone you may not want to pick up a BlackBerry tablet. 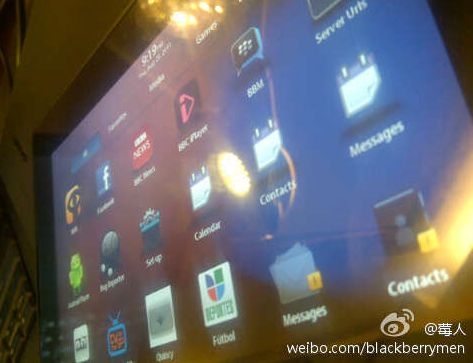 RIM has promised that it would eventually launch native apps for those functions, and now it looks like the day is fast approaching. MaxPDA has published photos showing what’s allegedly a leaked copy of BlackBerry Tablet OS 2.0. Among other things, they show email, calendar, and contact apps — although they all appear to have the same icon for now.

There’s also an Android App Player icon — which means that RIM is finally getting ready to launch a utility that will let you run Android applications natively on a BlackBerry PlayBook. An early build of this utility leaked earlier this summer.

The folks at The Verge also noticed something that appears to be missing from Tablet OS 2.0 — support for BlackBerry Exchange Server or Internet Server. While users will be able to setup email accounts using Microsoft Exchange ActiveSync, IMAP, POP, or CalDav, it looks like RIM’s own service isn’t going to work with the next-gen PlayBook OS.