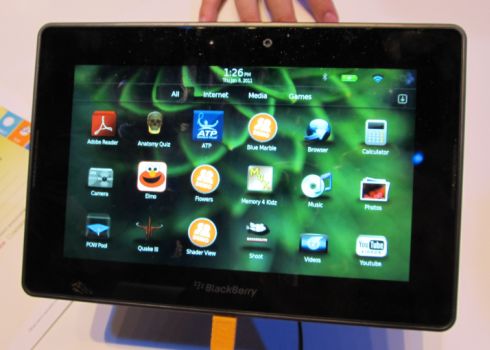 The BlackBerry PlayBook isn’t selling very well. Today Research in Motion executives noted that the company shipped 200,000 BlackBerry tablets during the latest quarter. Add the 500,000 tablets that RIM shipped the quarter before that, and… well that’s about it. RIM has shipped 700,000 tablets. We don’t know how many people have actually bought them because shipments only tell you how many units were sent to stores, wireless carriers, or other distributors.

But RIM is hoping to turn things around by taking two steps:

To make the price more attractive RIM plans to drop the cost of the 7 inch tablet, which currently retails for $499 and up (although you can often find one for much less

). The company will also offer rebates for existing customers and incentives for business customers.

There’s no word on how deep the discounts will be, but RIM is trying to drum up new customers, not liquidate remaining inventory — so it doesn’t seem like the company will be following HP’s lead and selling its tablet below cost anytime soon.

RIM is also hoping that an upcoming software update will make the tablet more attractive. The next major update to the operating system will bring native email, calendar and contact apps as well as the ability to run Google Android applications. The company will also launch an online video store, with about 10,000 movies and TV programs available to rent or purchase.

It’s not clear that either of these moves alone would be enough to help build buzz for the PlayBook. But if the company cuts the price enough, makes the tablet feel a bit more feature-complete even if you don’t have a BlackBerry smartphone (by adding native email and calendar apps), and expands support for third party apps by opening the door to Android apps, the PlayBook could be a more attractive option.

On the hardware front, the BlackBerry PlayBook is already pretty impressive, with a 1 GHz TI OMAP 4430 dual core processor, a 7 inch, 1024 x 600 pixel capacitive touchscreen display, and a unique operating system which offers better support for true multitasking than most mobile operating systems (you can even play a video in the background while running other apps in the foreground). But up until now, there probably haven’t been a lot of reasons for customers to choose the PlayBook over an iPad or any number of Android tablets.