US retailers are starting to offer $200 price cuts on the BlackBerry PlayBook. Or rather, the base price of the 7 inch tablet has fallen from $499 to $399, and companies are offering $100 rebates as well, bringing the total price of a 16GB tablet to $299. 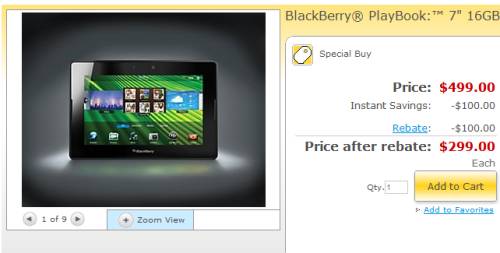 On Friday we saw similar price drops in Canada, the home country of BlackBerry maker Research in Motion. The price cuts follow news that RIM has only shipped about 700,000 PlayBooks so far this year. The company is hoping the price cuts, as well as an upcoming software update, will help boost sales.

RIM isn’t ready to pull an HP and cancel the PlayBook yet, which is why the company is still selling tablets for $299 to $499 instead of liquidating them for $99. Right now the PlayBook is designed to appeal to existing BlackBerry smartphone customers. For instance, in order to use the tablet’s native email, contact, or calendar apps you need to pair the device with a BlackBerry phone. But the upcoming software update will remove that restriction while also adding the ability to run Google Android applications — thus expanding the number of third party apps available for the PlayBook.

The PlayBook has a 1024 x 600 pixel capacitive touchscreen display, 1GB of RAM, a 3MP front-facing camera, and a 5MP rear camera. It features 802.11a/b/g/n WiFi and Bluetooth 2.1. The tablet has a 1 GHz dual core TI OMAP4 processor, can handle 1080p HD video playback and features BlackBerry Tablet OS, which is based on QNX software. It weighs about 0.9 pounds.

Staples and Office Depot are two of the first stores to offer the tablet at its new price of $299 and up.

Update: Best Buy is getting in on the action too.