With the release of BlackBerry PlayBook OS 2.0, RIM made it possible to run thousands of Android apps on the company’s 7 inch tablet. That dramatically increases the number of apps available for the tablet, since there are far more apps developed for Android than for the PlayBook OS.

Right now there are two ways to load Android apps. If a developer has uploaded an app to the BlackBerry App World, you can download and install it the same way you would install any PlayBook App. Or you can convert an Android app yourself and load it on the tablet manually it using BlackBerry’s tools.

That second option’s days are numbered. 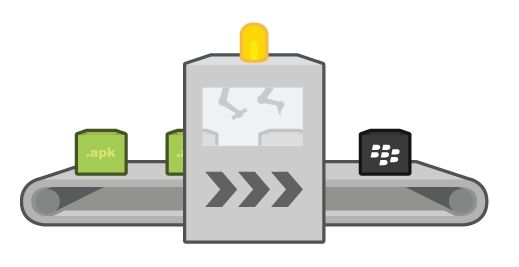 RIM VP Alec Saunders has confirmed that future versions of the PlayBook operating system won’t support so-called “sideloading” of Android apps. Tools will eb available for developers to test their apps before uploading them to the App World, but for most consumers the only way to install Android apps will be to get them from RIM’s official app store.

RIM is encouraging Android developers to submit their apps — even going so far as to offer free tablets to developers who convert their apps. But there’s no way to ensure that every developer will get in on the action, and there are hundreds of thousands of Android apps that aren’t available from the BlackBerry store, including many of the most popular Android apps.

On the other hand, RIM’s strategy makes sense as well, because right now there’s little preventing people from pirating Android apps and loading them on a tablet without the developer’s permission. Cutting off sideloading capabilities is a way to assure app developers that the company takes piracy seriously.

For those looking to break the rules though, jailbreaking may be the only hope. The next generation of the Dingleberry jailbreak tool for the PlayBook has been delayed, but it may still be released one day — and could make it possible to install the Google Play Store on the BlackBerry PlayBook, something that hasn’t been possible since PlayBook OS 2.0 was still in beta.

Update: Saunders has taken to the BlackBerry developer blog to clarify. While he says the company isn’t “getting rid of” of side-loading, but rather ensuring it’s a developer feature, the long and short of it is that if you’ve been relying on sideloading to get your favorite free (or paid) Android apps to run on the PlayBook, you may not be able to do that with the next version of the PlayBook operating system.