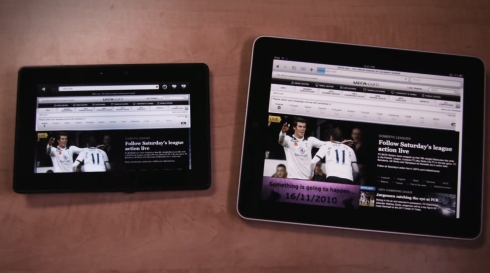 Wondering how the upcoming BlackBerry PlayBook stacks up against the Apple iPad? While we’re probably going to have to wait until the tablet is officially released before we get complete and unbiased third party comparisons, the folks at Research in Motion have put together a video that compares the web browsing experience on the two tablets.

It’s not surprising that the PlayBook comes out ahead, since the video was produced by RIM and likely favors content where the PlayBook excels. But the iPad has also been out for a few months while the PlayBook which isn’t available yet features next-generation technology including a dual core ARM-based processor.

That said, the video shows the PlayBook loading standard web pages more quickly than the iPad, as well as displaying Flash video while the iPad simply shows an error message.

Of course, the PlayBook takes it time loading Flash content… you’ll get a much better experience using a desktop web browser. But at least you have the option on the PlayBook.

The PlayBook browser also gets a perfect 100 score on the Acid3 web standards test, and has no rendering artifacts.It does well on JavaScript and HTML5 tests as well.

The video also shows off the on-screen keyboard for the PlayBook, which looks a lot better on a 7 inch display than the standard Android browser when scaled up to larger devices — although touch-typing is probably still easier on the iPad with its larger 10 inch screen.

You can check out the comparison video after the break.