Research in Motion plans to release a BlackBerry PlayBook 4G tablet soon. In fact, a 4G capable version of the 7 inch tablet already hit the FCC website last month. Now it looks like there are a few early models in the wild.

Last month a member of the CrackBerry Forums reportedly picked up non-working PlayBook 4G evaluation unit from eBay by accident and returned it to RIM. Now a second forum member has managed to get his hands on at least 3 working units, and he’s posted plenty of pictures to prove it. 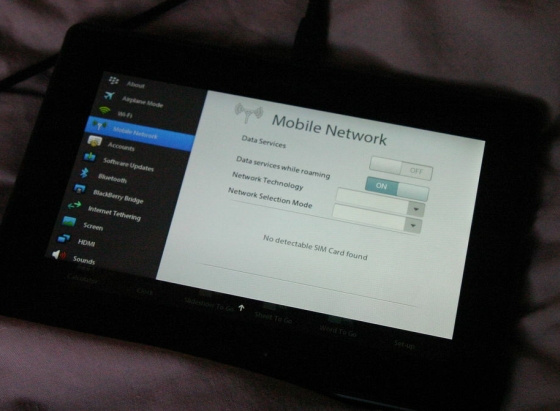 The BlackBerry PlayBook 4G looks virtually identical to the WiFi-only model that’s been available for over a year. The only differences are the BlackBerry 4G PlayBook label on the side of the device and the SIM card slot.

Under the hood the software appears to be a little different. There’s a Mobile Network option and RIM’s BlackBerry Messenger software comes preloaded.

The person who posted the pictures reportedly got them from a “skip rat” or someone who searches through dumpsters and other trash bins… so they may be samples that were discarded for some reason… or they may be stolen.

But they do show that the 4G version of RIM’s 7 inch tablet is a real product that may be ready to launch soon.

2 replies on “BlackBerry PlayBook 4G spotted in the wild”