BlackBerry shot down rumors this week that the company would be adding support for Google’s Play Store on BlackBerry OS phones. But that doesn’t mean BlackBerry isn’t going to make it a lot easier for users to run Android apps.

A leaked build of BlackBerry OS 10.2.1 is making the rounds, and one of the key changes is support for installing Android APK files. 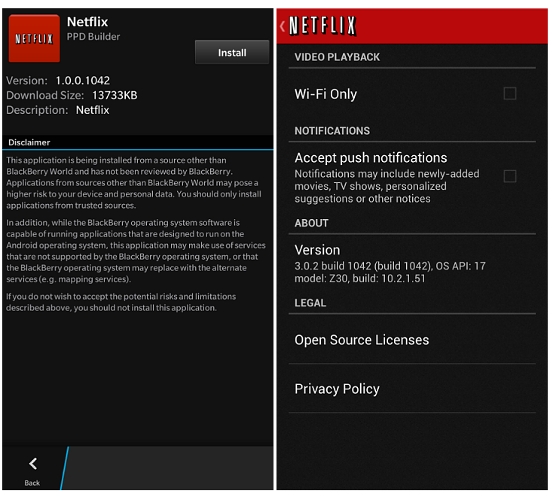 But with OS 10.2.1, it looks like you’ll be able to download and install any APK file you can get your hands on — whether it’s downloaded from a store like the Amazon Appstore, a tool like the Humble Bundle mobile app, or ripped from an Android device using Titanium Backup or a similar tool.

Basically users can download an APK, run the installer, read a disclaimer letting you know the app hasn’t been reviewed by Blackberry and could pose a risk to your device and data, and then click the install button.

Once that’s done, you can pretty much run an app as if it were a native BlackBerry app.

That includes apps that wouldn’t otherwise be available for BlackBerry devices, including Netflix and Instagram.

via N4BB and CrackBerry Forums