There was a time when BlackBerry pretty much dominated the smartphone space, but that was a time when there also wasn’t as much strong competition. These days BlackBerry has stopped making its own hardware and sells phones built by TCL that run Google’s Android operating system.

But they still have some BlackBerry DNA in them, thanks to BlackBerry apps including BlackBerry Messenger, Hub, and more.

While the BBM secure messaging app is available as a free download from Google Play, the App Store, or BlackBerry World, a new report suggests that BlackBerry plans to launch a subscription-based version for enterprise users, featuring stronger security features. 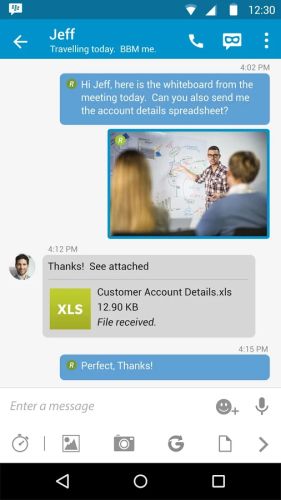 The Globe and Mail reports that later this month Canada-based BlackBerry is planning to launch a new BBM Enterprise SDK that’s subscription-based.

Developers will be able to use the SDK to create their own secure messaging apps base on the platform. The pricing hasn’t been announced yet, but it isn’t expected to be cheap. There may be multiple tiers, with one price for text-only messaging apps and a higher price for apps that can also handle encrypted audio and video communications.

One key benefit? Businesses could create their own app that uses its own encryption keys… which means that BlackBerry wouldn’t be able to access any of the messages sent through the service even if the company wanted to. That gives companies more control over the security of their communications, (and lets BlackBerry off the hook if law enforcement comes asking to see messages).