BlackBerry’s last two smartphones have been Android-powered devices featuring a suite of BlackBerry apps for communication, security, time management, and other functions. Now you don’t need a BlackBerry phone to use some of those apps anymore.

The company has released BlackBerry Hub+ for Android, which brings BlackBerry’s unified messaging app as well as its calendar and Password Keeper apps to any phone running Android 6.0 or later. 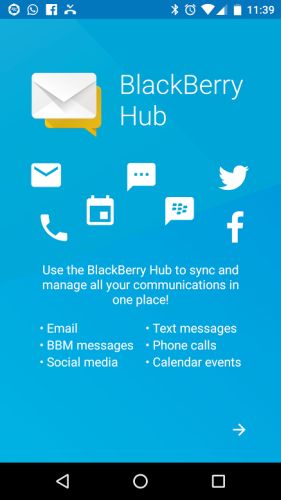 To use the apps, you just need to download and install BlackBerry Hub and BlackBerry Services from the Google Play Store. You can also optionally install the Calendar and Password Keeper apps (they’re not installed by default).

Once installed, you can use the apps for 30 days without paying a penny or encountering an ad. After that, you can either put up with ads or pay 99 cents per month. Paying customers also get access to additional BlackBerry apps including Contacts, Tasks, Device Search, Notes, and Launcher.

BlackBerry is hoping to bring the suite of apps to devices running Android 5.0 as well, but for now you’ll need Android 6.0 — which is the same operating system that’s running on the BlackBerry Priv and DTEK50 smartphones.

I just installed Hub and Calendar on my Nexus 5 and they seem like interesting options. The calendar app is attractive and has a few nice features, but not enough to convince me to stop using Business Calender 2. And while I like the idea of a unified messaging inbox, the truth is that 90+ percent of messages can be dealt with more quickly using the Gmail app (I get a lot of email, and not a lot of SMS or phone calls).

Still, the suite of apps could come in handy for BlackBerry refugees making the move to Android… or Android users that want to see why BlackBerry still has a small but loyal fan base.

Keep in mind that you’ll need to grant the apps permission so access you phone logs, email, and a whole bunch of other personal data in order to make full use of them.