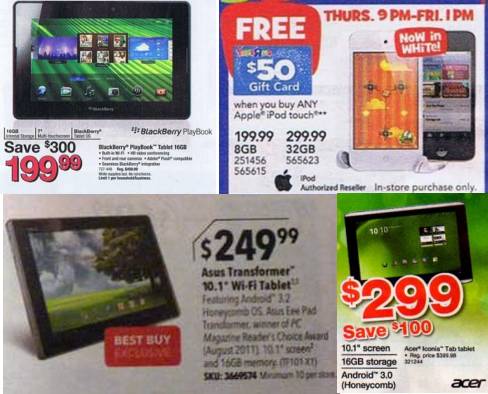 There’s a week to go until Black Friday. The day after Thanksgiving is the traditional start to the holiday shopping season, and in order to help keep that tradition alive, a number of retailers run Black Friday specials with some of the deepest discounts of the year.

Many of the deals are so-called “doorbusters,” which means that limited quantities will be available and you’d better get to the store early to snage them. Others may be available all day.

Here’s a roundup of some of the best deals on mobile devices expected to go on sale on Friday, November 25th, 2011.

We’ll be updating this list as Black Friday approaches.

Amazon Wireless is offering every Verizon, Sprint, and AT&T phone for just one penny when you sign up for a new service plan. That includes the Motorola Droid RAZR 4G, Samsung Galaxy S II, HTC Rezound 4G, and Sony Ericsson Xperia Play 4G Android phones as well as a number of BlackBerry and Windows Phone models.

If your phone has a mobile hotspot feature and you activate it, Amazon will also throw in a $100 gift card.

You don’t have to wait until Black Friday for this one. Amazon is already offering these deals and throwing in free 2-day shipping to boot.

Most of Best Buy’s deals will be available in-stores, but you can also visit  bestbuy.com/onlineonly to view online bargains.

Retail CompUSA stores in a handful of states will reportedly be offering a 32GB HP TouchPad tablet with a case, stand, and Bluetooth speakers for $229.99. This deal will not be available online.

The electronics store apparently managed to snag some HP TouchPads, because the retailer will be offering the tablet for $150 to cusotmers that purchase qualifying HP laptops. Prices range from $530 to $650 for the advertised bundles.

Gameloft is offering all of its HD video games for Android and iOS for 99 cents this weekend, inclduing Order & Chaos, Starfront: Collission, Eternal Legacy, Asphalt 6, Modern Combat 2, and more.

HP will be offering discounts on webOS apps in the App Catalog starting Friday morning.

Update You can use the coupon code 09OLTY12 to take an extra $10 off the price of a PlayBook tablet.

You can find more Black Friday deals at BlackFriday.info, which has full scans of Black Friday ads from a number of retailers.