Google plans to roll out a new feature for Android phones called Google Now on Tap, which will let you swipe up from the home button on any screen to get relevant information.

Chatting with a friend about restaurants? Now on Tap can show you directions, phone numbers, and menus. Looking up a movie? Google can bring up trailers, IMDB data, and more.

But Now on Tap won’t be widely available until Google releases Android 6.0 Marshmallow. Want to give it a try now? You can’t… but you can try Microsoft’s version.

Microsoft has just released a new version of its Bing Search app for Android, and it has a feature called Snapshots which works an awful lot like Now on Tap. 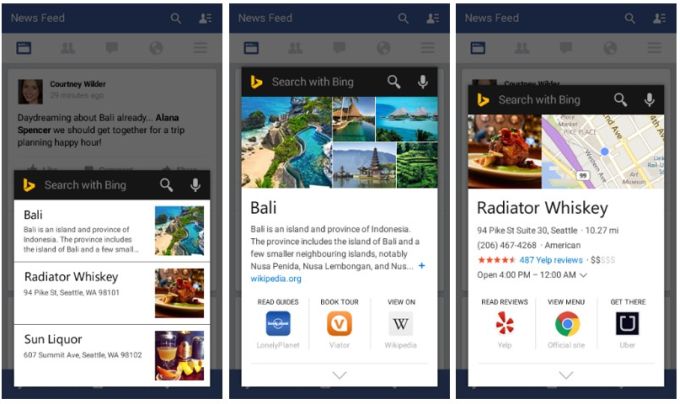 Once you’ve installed the Bing Search app and set it up to detect long-press or swipe-up actions from your home button, you can press or swipe from any screen to get a Snapshot from Microsoft’s Bing knowledge and action graph.

The app will read the contents of the screen you’re looking at and suggest relevant information or apps. For example, if you’re reading a news article in a web browser, a long-press can bring up links to Wikipedia pages with more information about the subject of the article. Watching a movie trailer on YouTube? Long-press the home button to bring up details about the cast, IMDB info, or even showtimes and tickets.

Microsoft is launching Bing Snapshots initially for Android, but the feature will eventually be available for Windows 10 mobile and desktop as well. The company is also encouraging developers to integrate its action and knowledge graph directly into their apps to bring similar contextual search functionality without the need for a pop-up.

I tried the latest version of Bing Snapshots out on my phone, but it didn’t seem to work… possibly because I’m running an unsupported Android M developer preview. But other users have reported that it works as promised on their devices.