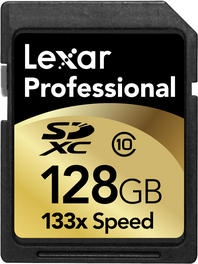 I remember when I got my first 16MB SD/MMC card and marveled at how much storage space a flash card the size of a postage stamp could hold. That was about 10 years ago. A lot has changed in the past decade, and today Lexar has announced it’s launching the first Class 10 128GB SD card, as well as a 64GB model.

These are technically SDXC cards, because the folks at the SD association decided the the “high capacity” acronym SDHC just didn’t do justice to the enormous amount of storage space you get on these new cards.

Lexar says its new 64GB and 128GB Class 10 cards have minimum speeds of 20MB per second, which should be enough for shooting HD video or taking an awful lot of photos with a high performance camera.