The Polaroid 701i isn’t a very good Android tablet. But it is a very cheap Android tablet. It runs Google Android 4.0 and normally sells for less than $150, and right now Big Lots is offering the tablet for $99.99.

The only catch is that the deal is good in stores only. You can’t order online. 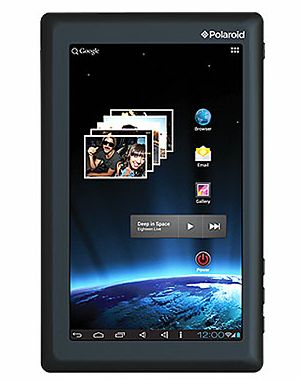 In addition to the Android 4.0 software, here’s what you get for a hundred bucks:

The Polaroid 701i ships without the Google Play Store, but the folks at the xda-developers forum discovered that the tablet comes pre-rooted. That means installing the Play Store is pretty easy — assuming you’ve had some experience working with rooted Android phones or tablets.

At $100, the Polaroid 701i looks like a pretty good deal for anyone looking for a dirt cheap tablet for web browsing, playing games, or other basic activities. It might make a good first tablet or a tablet for a child.

But the tablet has a low resolution display and reportedly has poor viewing angles, so it’s probably not the best choice for reading eBooks, surfing the web, or watching videos. In fact, if you already have an Android smartphone, odds are it already has a higher quality screen.