The folks at Big Fish Games have launched a new subscription gaming service that lets you access over 100 video games for $7.99 per month. It’s called Big Fish Unlimited, and it’s kind of like a Netflix for video games.

If that sounds like the GameTanium service Verizon introduced last month, that’s because it is a lot like GameTanium… but better. 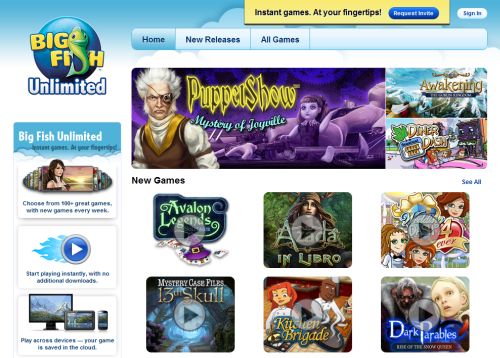 While GameTanium is cheaper, running just $6 per month, it’s only available on phones and tablets. Big FishUnlimited runs on a range of devices including smartphones, tablets, computers, and even internet connected TVs. Later this year the service will be available on Roku set-top-boxes.

Instead of downloading games to you device, you actually stream them over the internet, so you don’t necessarily need a bleeding edge, super-fast device to play.

At launch there are more than 100 games available to play, from 42 developers. Big Fish Games has access to a library of more than 2500 games though, so there are plans to add new titles to the subscription service soon.

There’s also a free, ad-supported version of Big Fish Unlimited which offers access to fewer games. The company will make 20 games available at a time, swapping out some titles for new games in a rotating catalog.

To get started with Big Fish Unlimited, you’ll need to request an invite.