Having spent a little time with hybrid tablet-style notebooks which swap out a physical keyboard for a touchscreen display that you’re supposed to type on, I have to say the experience is still pretty lousy. While the Toshiba Libretto W100 and Acer Iconia Touchbook look cool as all get-out, they’re still expensive niche concept devices at the moment that aren’t nearly as easy to type on as a typical notebooks. That said, there’s something awfully compelling about designer René Woo-Ram Lee’s Bento PC concept. 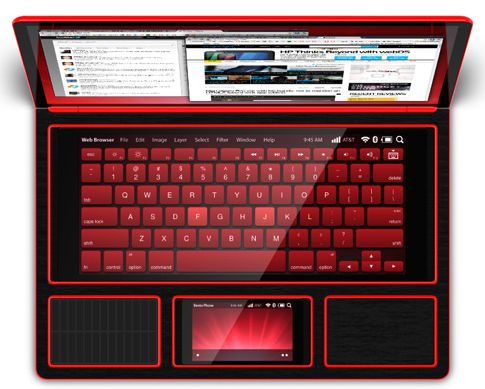 Here’s the pitch: It’s a modular PC consisting of a laptop frame with a 15 inch OLED display, and 11 inch tablet where the keyboard should rest, a 4 inch smartphone where the touchpad would normally be, and a SSD and solar-charging battery in the palm rest to either side of the phone.

Here’s why it might actually be a good idea: 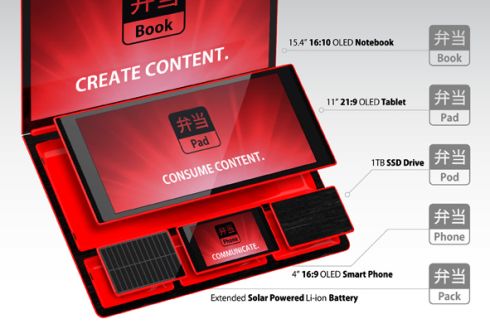 On the other hand, there’s at least tow reasons to resist this kind of device. First, like most existing devices with touchscreen instead of tactile keyboards, it may be a jack of many trades, master of none. And more importantly, while you could probably build a Bento-like device today, it’d likely be prohibitively expensive.

Fortunately, both of those things could change in time as display technology, haptic feedback and similar technologies continue to evolve and component prices continue to fall.

The developer envisions a Bento PC which could measure less than 15mm thick. There wouldn’t be any processor or operating system in the laptop shell. Instead the CPU and software would come from removable tablet, making the work a bit like the Motorola Atrix 4G webtop laptop docking station.

You can find more photos at Yanko Design.