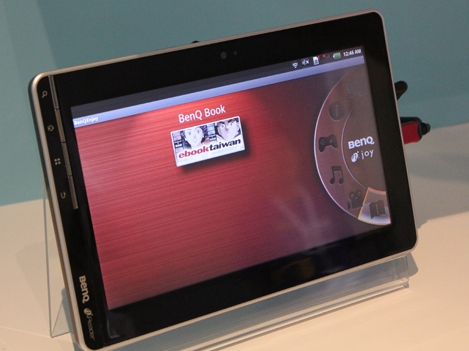 BenQ is probably best known for producing computer monitors and related devices including projectors. But the company has been dipping its toes in the netbook space for a while, and now BenQ is introducing an Android tablet called the BenQ nReader R100.

The tablet will have a 10.1 inch, 1024 x 600 resistive touchscreen display and an HDMI output, as well as a battery which BenQ says is good for up to 12 hours. It will support WiFi and 3G and weigh about 1.5 pounds. It will have a 667MHz Samsung ARM-based CPU, and will run Google Android 2.2, although Google Translate isn’t quite good enough for me to determine if it will initially ship with Android 2.2 or an earlier version of the operating system.

It also looks like the tablet will run BenQ’s custom media software for reading eBooks, playing movies, music, and games.

5 replies on “BenQ has an Android tablet too”