What makes the new model different is that it’s thinner, lighter, gets slightly longer battery life, costs less, and oh yeah… it has an ARM-based processor instead of an Intel Celeron x86 chip. 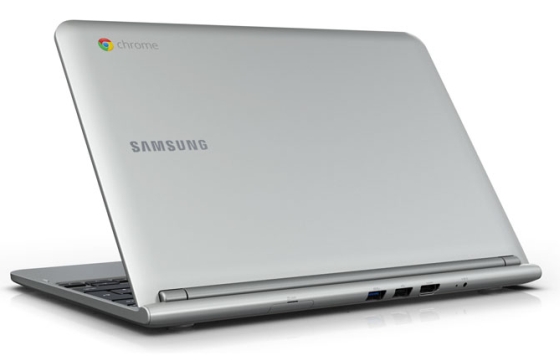 I’ve been using the new Chromebook for the past few days. I’ll have a full review next week, but I’ve been pleasantly surprised by the performance and I wanted to share a few details.

As you might expect, the Intel-powered Chromebook 550 came out ahead in both tests. But the differences weren’t as great as I would have expected. 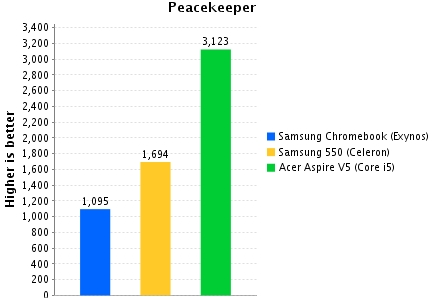 At least part of that is probably because Chrome OS has been updated since I tested the version with an Intel Celeron chip this summer. GigaOm’s Kevin Tofel has both models on-hand, running the latest software, and he’s found a slightly larger performance gap when running tests on two models running the latest versions of Chrome OS.

But for an ARM-based device that costs just over half as much as the Chromebook 550, the new Chromebook fares pretty well in these tests. The scores are much better than I typically see for mobile devices with ARM-based chips running Android, for instance. 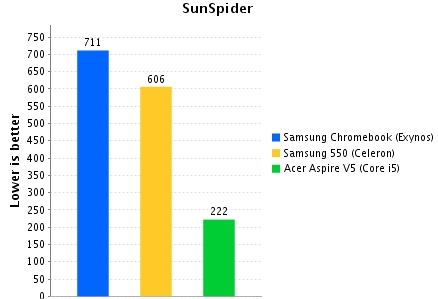 I ran the same tests on an Acer Aspire V5 laptop with an Intel Core i5 Ivy Bridge CPU, Windows 7 software, and the Chrome web browser. It scored higher than either Chromebook, but that laptop also can’t boot in 10 seconds and costs more than $500.

Here’s what the benchmarks alone won’t tell you. I’ve used the new Samsung Chromebook to write blog posts, conduct research with more than a dozen browser tabs open, and stream video. And so far it’s never felt slower than a typical laptop.

As a Chrome OS device, the Samsung Chromebook is only really a replacement for a full-fledged laptop if you can rely on a web browser as your only real app. But if you can live with that, the new model with a Samsung Exynos 5 ARM Cortex-A15 processor and $249 price tag offers a user experience that’s surprisingly close to what you’d get from the $449 Intel-powered model.

13 replies on “Benchmarking the $249 Samsung Chromebook”