Chinese PC maker Beelink’s latest small form-factor desktop computer looks… a lot like a bunch of the company’s other recent models. But under the hood there’s something different about the Beelink LZX: it’s powered by a Zhaoxin KX-6640MA processor.

Zhaoxin is a Chinese chip maker that’s one of the only companies beside Intel and AMD making x86 processors. Those chips are not widely available outside of China though, and it’s unlikely that customers in most parts of the world would be able to buy a Beelink LZX even if they wanted to. Although you might be able to pick up a different PC with the same chip. 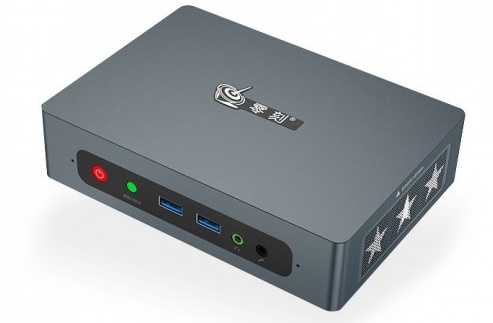 First spotted by CNX Software, the Beelink LZX is available in Indonesia, where a model with 8GB of RAM, a 256GB SSD, and a Zhaoxin KX-6640MA processor sells for the equivalent of $270.

The processor is a 2.1 GHz quad-core processor based on x86 architecture. It supports turbo speeds up to 2.6 GHz, has integrated graphics with support for 4K video playback, and has a TDP of 25 watts.

While the chip isn’t particularly competitive with the latest Intel or AMD processors in terms of performance-per-watt, it’s an interesting processor because it’s not made by one of those companies. And the fact that it’s being used in inexpensive computers means that it’s designed to compete more with entry-level chips than high-end, high-performance processors anyway.

The Beelink LZX has two Gigabit Ethernet ports, two HDMI 2.0 ports, six USB 3.0 ports, mic and headset jacks, and support for WiFi and Bluetooth. The memory and storage are upgradeable – the system has two SODIMM slots for up to 64GB of RAM and two M.2 2280 slots for solid state storage as well as a 2.5 inch drive bay for an optional hard drive.

But CNX Software reports that Beelink only plans to sell the LZX in China (even though it’s listed on an Indonesian website), and the company has already ceased production of the computer due to chip shortages. So you might be able to pick up one in China while supplies last, but the rest of the world is probably out of luck.

If you want a computer featuring a Zhaoxin KX-6640MA processor though, there is at least one option available in the US: Newegg is selling a little computer with similar specs for $260.