Chinese mini PC maker Beelink is preparing to launch a tiny new desktop computer with a quad-core Intel Celeron J4125 processor and support for up to two 4K displays.

The upcoming Beelink Gemini M is a 4.7″ x 4.7″ x 0.7″ computer that weighs just 340 grams (about 12 ounces). Beelink hasn’t announced a price or release date yet, but the company has shared a short teaser video on YouTube. 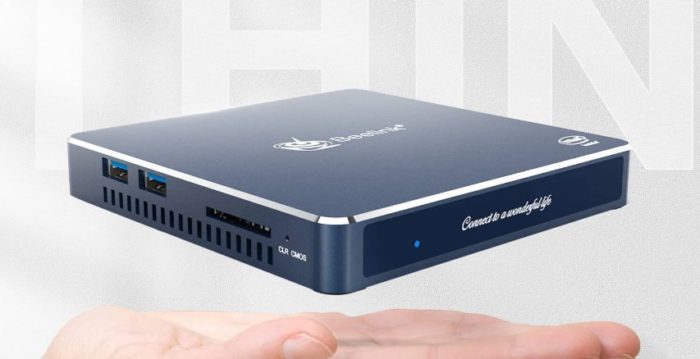 Intel’s Celeron J4125 chip is a 10-watt, 4-core, 4-thread processor with support for burst speeds up to 2.7 GHz. It features Intel UHD 600 integrated graphics, which isn’t enough to make the Beelink Gemini M a gaming powerhouse, but the GPU should be good enough for 4K video playback.

On the back of the little computer, there are two HDMI ports and Ethernet and headphone jacks as well as an AC adapter port and a power button.

There are four USB 3.0 Type-A ports on the sides, as well as an SD card reader. The system has 8GB of RAM and 64GB of eMMC storage soldered to the motherboard, and there’s also an M.2 2242 slot for an optional SATA III SSD.

The Beelink Gemini M is actively cooled, so you’ll also find a small fan inside the case, and the system also supports dual-band WiFi.