When I reviewed the Intel Bean Canyon NUC small form factor desktop computer in 2018, I noted that its 28-watt Intel Core i5-8259U processor with Intel Iris Plus 655 graphics gave it an edge over most other similarly-sized mini PCs at the time.

A few years later, Intel has a few 15-watt processors that can give the chip a run for its money, but the Core i5-8259U chip based on Intel Coffee Lake architecture is still no slouch, and it’s better than the processors powering many of the mini desktops coming from Chinese PC makers, for example.

But now two of those Chinese PC makers have released compact desktop computers that use the same processor as Intel’s Bean Canyon NUC systems. The GMK NucBox2, Beelink SEI, and Beelink GTI were introduced in January, 2021 and now they’re available for purchases, with starting prices that are similar or a little lower than what you’d pay for a Bean Canyon NUC. 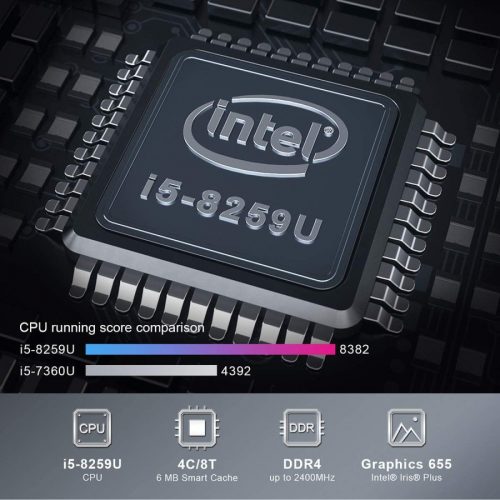 The latest PCs from Beelink will actually be available with several different processor options. There’s a version with a 10th-gen Intel Core i3-10110U Comet Lake dual-core processor, and another version with an older, but faster 8th-gen Core i5-8259U quad-core chip.

If you’re looking for something a little larger with a few extra features including support for dual storage cards, more USB ports, and a fingerprint sensor atop the case, there’s the Beelink GTI i5-8259U mini PC. It’s available from Amazon for $499 (or $455 when you click the on-page coupon), and comes with 8GB of RAM, 256Gb of storage, and Windows 10 Pro.

Features for this model include: