Take the guts of a cheap Android phone, subtract a screen and add a pico projector and you’ve got a tiny PC you can use to watch movies, surf the web, or play games on just about any surface in your house.

We’ve seen a few devices like this recently from companies including ZTE and Aiptek. But a startup called Beam Labs is working on something a little different: the Beam is a smart projector that fits in a light socket.

Beam has already surpassed its $200,000 Kickstarter funding goal, and the team hopes to deliver the first units in October, 2015. You can back the campaign with a pledge of $399 or more to try to reserve one. 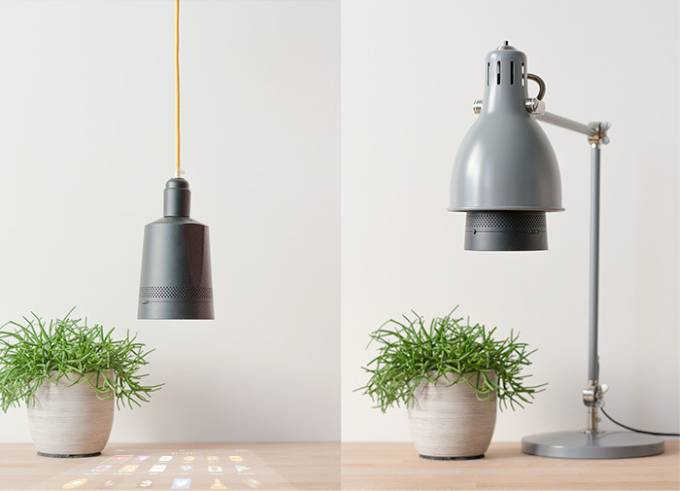 The Beam has a dual-core processor, 8GB of storage, 802.11b/g/n WiFi, and Bluetooth 4.0. It runs Google Android and has 2 watt stereo speakers and a 100 lumen pico projector with a display resolution of 854 x 480 pixels — although the team says if it can figure out a way to use a higher-resolution projector, it will upgrade the hardware before shipping the Beam later this year.

What makes this device unusual is that instead of plugging the Beam into a wall jack, you connect it to a light socket. It draws power through the socket the same way a light bulb would, and works with E27 sockets (or you can use a Bayonet adapter if you’re in a country that uses that standard).

Since the device fits in a light fixture, you can use an articulated desk lamp as a sort of projector stand. Or you can hang the Beam over your dining room table or kitchen counter to project games, videos, or other content directly onto a flat surface so you can watch cooking videos while you cook, for instance, or read the news as you eat.

There’s also a lamp function thanks to 12 LED lights. So when you just want to use your light fixture as, well, a light fixture, you can do that without unscrewing the Beam.

You can use a mouse, keyboard, or game controller to interact with the Beam, but there will also be iOS and Android apps which you can use to control the device. Or you can send content to the Beam using Airplay or Miracast.

The device includes the Google Play Store, which means you should be able to run most Android apps — although it seems to be running stock Android software rather than Android TV, which means that some apps which are designed for touchscreen displays may be hard to use on a device that doesn’t have a touchscreen.

All told, the Beam is one of the most unusual Android mini PCs I’ve come across in the past few years… and also one of the most expensive. But it’s not much more expensive than a standalone pico projector, which could make this little Android PC an interesting option for folks that were thinking of picking up a tiny projector anyway.