The BeagleV Starlight single-board computer was supported to be an affordable development platform for folks who wanted to get started with RISC-V architecture. Expected to sell for under $150, the BeagleV project was first announced in January and boards were expected to begin shipping in April.

But the BeagleV Starlight never went into mass production, although some prototypes were shipped to developers. Now the board is considered a prototype, and the project has been closed. But the folks at BeagleBoard say they’re working with Seeed Studio on a new RISC-V board that could be ready to ship in the first quarter of 2022. 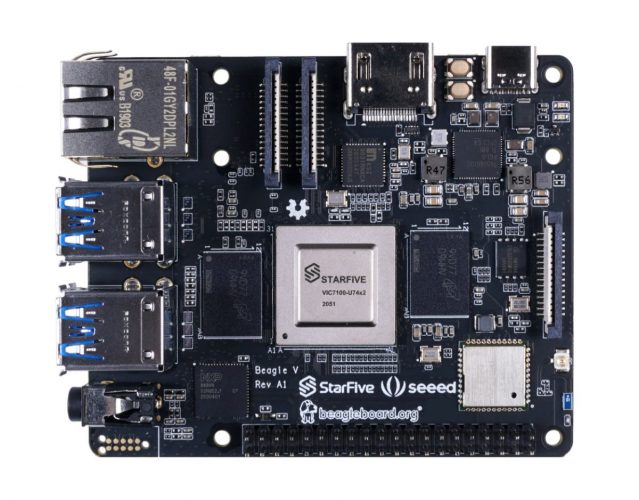 There are few details available about that upcoming board, and virtually no information about why the BeagleV Starlight board was cancelled. But BeagleBoard’s Drew Fustini made both announcements in a brief post at the BeagleBoard forum.

The discontinued Starlight board was designed around a 1.5 GHz SiFive U74 dual-core processor based on the open standard RISC-V architecture and delivering performance that’s roughly on par with an ARM Cortex-A55 processor.

It was supposed to feature 8GB of LPDDR4 memory, HDMI, Ethernet, audio, and USB ports, plus support for WiFi 4 and Bluetooth 4.2 wireless connections, MIPI-CSI and MIPI-DSI connectors for cameras and displays, and a 40-pin GPIO connector.

The SiFive U74 system-on-a-chip also includes a neural engine for hardware-accelerated AI, but the system lacked a dedicated GPU, which would have made it tough to use for video, gaming, or graphics applications. Still, as a development platform, it would have been one of the more affordable, versatile RISC-V solutions available… if it had ever become widely available.

Maybe the next BeagleV device will deliver on that promise if and when it ships.

August 4, 2021 Update: StarFive, the company behind the JH7100 processor used in the BeagleV Starlight, says it’s working with Radxa to produce a new single-board computer featuring the same chip. It’s expected to launch by the end of Q3, 2021.

via BeagleV and CNX Software

6 replies on “BeagleV Starlight RISC-V single-board computer canceled, a new model may be coming in 2022”