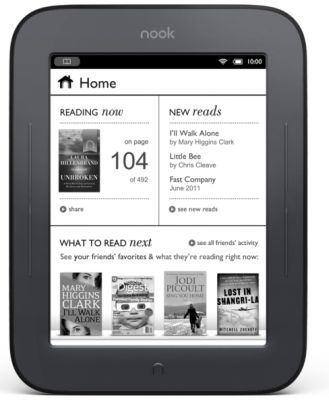 Barnes & Noble’s NOOK Color is one of the best selling tablets and eBook Readers around, but the company isn’t giving up on E Ink just yet. Today the company introduced a new NOOK eReader with a 6 inch E Ink touchscreen display. While the new NOOK has the same screen size as the latest Amazon Kindle, the device is substantially smaller, has fewer buttons, and Barnes & Noble promises the battery is good for up to two months.

Two months. That explains why E Ink is still viable. The NOOK Color can run for a day or two on a charge. But you can get by with barely ever charging an E Ink NOOK.

The company also promises that the eReader will have almost no lag when turning pages. The device measures 6.5 inches by 5 inches and weighs just 7.5 ounces. It will ship on June 10th for $139.

Of course, Barnes & Noble isn’t the only company launching a low cost touchscreen E Ink eReader. Kobo introduced a similar product yesterday which will weigh 7 ounces and sell for $130. But it’s not clear that Kobo has the brand recognition that Barnes & Noble does… and with Borders in bankruptcy, Kobo has lost one of its biggest US partners.

Update: It looks like the new NOOK will be powered by Google Android 2.1. While Barnes & Noble doesn’t plan to offer third party apps for the device, this opens up the possibility of hackers rooting the device and allowing it to run other apps… such as Google Books, Amazon Kindle, or Aldiko, perhaps?