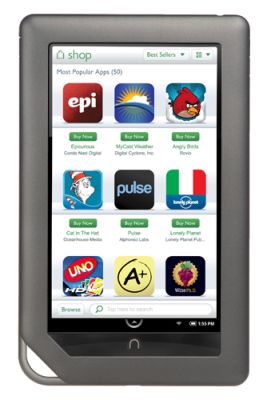 The Barnes & Noble NOOK Color is one of the best-selling Android tablets in the US, even though the company positions it as a color eBook Reader first and a tablet second. Now it looks like B&N’s 7 inch, $249 tablet may be getting a pricier sibling.

Nate at The Digital Reader received a tip that the company plans to launch a new $349 device next quarter. It will have the code-name Acclaim… and that’s really about all that we know about it. There’s no word on the screen size, processor, or any other specifications.

As Nate points out, GameStop also used to be run by Barnes & Noble. Although that relationship ended in 2004, it’s possible that the Acclaim could be the code-name for the upcoming GameStop Android tablet — but I kind of doubt it. GameStop has already reportedly selected an existing tablet, and that would probably preclude the a new NOOK tablet.

The company’s existing eReaders include the $139 NOOK Simple Touch E Ink eReader and the $249 NOOK Color – which may also receive an update.

One reply on “Barnes & Noble to launch $349 Android tablet?”