Barnes & Noble plans to split into two companies by early 2015. The company has announced plans to spin off its NOOK digital book division as a standalone company while Barnes & Noble will remain as a bricks and mortar book store chain. 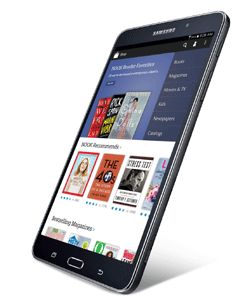 The decision follows a rocky couple of years for B&N. While the company rightly identified the importance of the growing eBook space early on, the NOOK line of eReaders and tablets have struggled to compete with Amazon’s Kindle and Kindle Fire devices.

Recently Barnes & Noble announced that it would no longer make its own tablets, instead partnering with companies like Samsung to release tablets with NOOK software like the upcoming Samsung Galaxy Tab 4 NOOK tablet.

Barnes & Noble’s latest financial report shows that retail and college revenues were up in the fourth quarter of 2014 from the same period a year earlier… but revenue from the NOOK division was down by more than 22 percent.

When you look at the full fiscal year, revenues were down across the board when compared with FY 2014.

It’s too early to say whether splitting into two companies will help either the NOOK or retail companies to do better in the coming years… but that’s clearly what Barnes & Noble is hoping for.