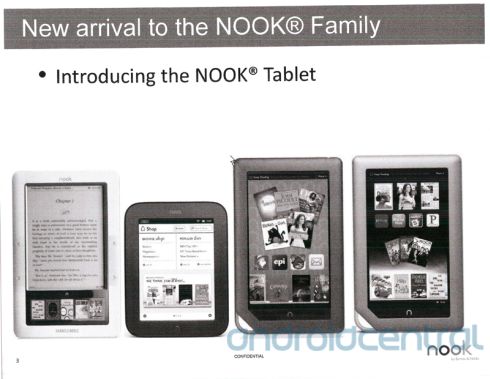 Update: Barnes & Noble has officially launched the NOOK Tablet, as well as new pricing for the NOOK Color and NOOK Simple Touch.

Barnes & Noble is expanding the NOOK family with a new NOOK Tablet. According to leaked documents it will go up for pre-order on Monday and ship November 16th. The tablet will run $249.

That’s the same price the Barnes & Noble NOOK Color launched at last year. But instead of discontinuing the NOOK Color, B&N is lowering the price. You’ll be able to pick one up for $199.

Meanwhile, while the NOOK Tablet looks like the NOOK Color, it’s a little thinner and lighter, and packs more horsepower. It measures 0.48 inches thick, weighs 14.1 ounces, and is powered by a TI OMAP4 dual core processor.

The NOOK Tablet features 1GB of RAM, 16GB of storage and has a microSD card slot for expansion.

The tablet is about $50 more expensive than the Amazon Kindle Fire which will also start shipping in the middle of November. But the Kindle Fire has a 1 GHz dual core processor, 512MB of RAM, 8GB of storage, and no SD card slot.

On the other hand, Amazon offers movies, TV shows, and other digital content for purchase or rental and not just eBooks. But Barnes & Noble will rely on third party apps to fill in some of those gaps. The NOOK Tablet will come with Netflix, Hulu, and Pandora apps.

A software update for the original NOOK Color will also bring music and video apps as well as a Scrabble app designed specifically for the NOOK Color.

Barnes & Noble is also apparently dropping the price of the NOOK Simple Touch eBook Reader with a touchscreen E Ink screen to $99. That’s the same price as the Amazon Kindle Touch — but to get the Kindle Touch for that price you need to put up with advertisements on the screen saver. The ad-free version runs $139.

Barnes & Noble is holding a launch event for the new tablet in New York on Monday, but a leaked document started making the rounds this afternoon, stealing a bit of the company’s thunder.

You can find more leaked slides at Android Central and Engadget.