Just a day after introducing a new, cheaper version of the NOOK Tablet, Barnes & Noble has released a software update for the 8GB and 16GB versions of the tablet. According to the company, OS version 1.4.2 “provides minor system enhancements” including an updated email application. 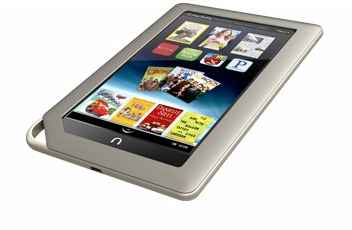 Like most previous software updates, there’s also a good chance that if you’ve rooted your tablet you’ll lose root access if you upgrade from OS 1.4.0 or 1.4.1 to the latest software.

Xda-developers forum member DeanGibson has already updated his tools for rooting the NOOK Tablet to work with version 1.4.2 — but the steps are rather complicated and you may have to wipe your data and restore your system to OS 1.4.0 before you start.

Meanwhile, some folks have noticed that the method for rooting the 16GB NOOK Tablet or installing custom recovery apps or other software by booting from a microSD card doesn’t appear to work on the new 8GB NOOK Tablet. But there’s a very good chance that’s simply because the files used on the 16GB model need to be modified to work properly on the new tablet due to minor hardware variations.

Long story short, it might be a little while before people figure out how to root the new 8GB tablet or install custom ROMs, but it should be possible to do so.

If you’ve already got a 16GB NOOK Tablet, don’t like the official B&N software, and don’t want to deal with the hassle of re-rooting your tablet every time a new software update is released, you can follow our guide for installing CyanogenMod 7 on the NOOK Tablet to install a custom version of Android 2.3.