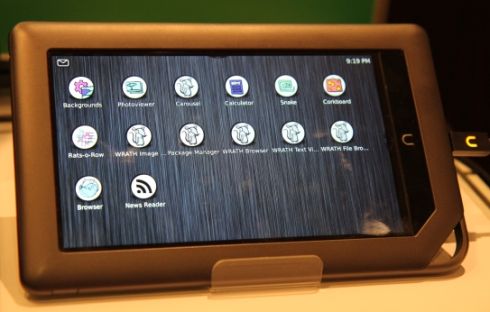 The Barnes & Noble NOOK Color is turning out to be a ridiculously versatile device. Originally positioned as a color eBook reader which just happened to run Google Android, it didn’t take long for hackers to figure out how to root the tablet and install their own apps. Now another hack shows that it’s possible to run a completely different operating system on the eReader: MeeGo Linux.

MeeGoExperts spotted a demo of a NOOK Color running MeeGo at Computex in Taiwan. The responsible party is a company called Nomovok which develops MeeGo and other open source applications.

The user interface looks a little different from the standard MeeGo UI for tablets, but the operating system appears to be pretty responsive on the tablet even though the project is still a work in progress.

The hacked NOOK Color now has a working touchscreen, WiFi, and hardware controls, but the g-sensor and Bluetooth are non-functional. It might just be a matter of time before those issues are overcome though.

The 7 inch tablet has a 1024 x 600 pixel IPS display, an 800 MHz OMAP3621 processor, PowerVG SGX 530 graphics, 8GB of storage and 512MB of RAM. It runs about $249, making it rather pricey for a dedicated eBook reader, but pretty cheap for a tablet — especially for a tablet that’s so readily hackable.