The Banana Pi BPI-R2 Pro is a single-board computer with a Rockchip RK3568 processor, 2GB of LPDDR4 memory, 16GB of eMMC storage.

But what sets this little computer apart from most single-board PCs is that it’s designed for use as a router. It has five Gigabit Ethernet ports and connectors that you can use to add an optional wireless card. 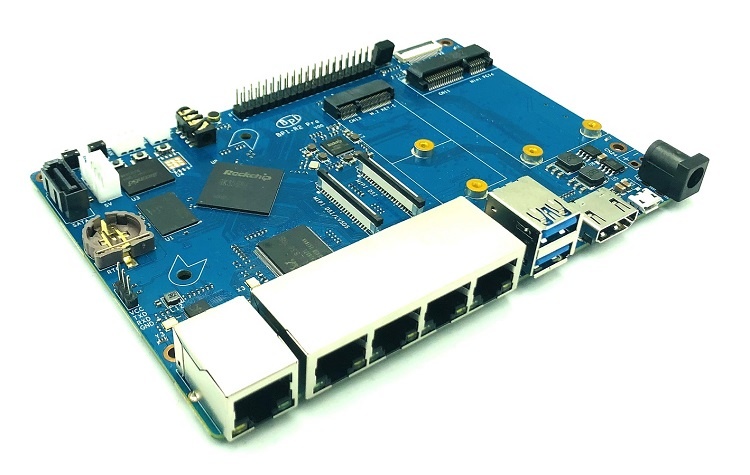 At the heart of the new board is a 2 GHz ARM Cortex-A55 quad-core processor with Mali-G52 graphics and a dedicated neural processing unit. And in addition to the Ethernet ports, there are M.2 and mini PCIe card slots that can be used to add a WiFi & Bluetooth module and/or a 4G or 5G modem.

Other features include an HDMI port, two USB 3.0 ports, a micro USB 2.0 port, a 3.5mm audio jack, a microSD card reader, and a SATA connector. There are also two MIPI-DSI display interface, a MIPI-CSI interface for a camera, and a 40 pin header.

The makers of the BPI-R2 Pro offer several operating systems that can be installed on the board, including builds of Ubuntu 21.04 or Debian 10 GNU/Linux distributions or OpenWRT-21.02, an operating system designed to function as open source firmware for routers.

The new board looks is physically quite similar identical to the original BPI-R2 which launched five years ago, but the manufacturer has upgraded the processor from a 1.3 GHz quad-core ARM Cortex-A7 processor to a the much faster Rockchip RK3568 processor.

While the old model also had built-in support for WiFi 4 and Bluetooth 4.1, the new version does not, but instead has plenty of options for adding your own wireless module.