The Banana Pi BPI-Pico-RP2040  is a tiny, low-power single-board computer that looks a lot like the Raspberry Pi Pico… and should be compatible with most Pico-powered projects, since it has the same processor and dual 20-pin headers along the sides.

But Banana Pi’s model has a few key differences. First, it has a USB Type-C port rather than micro USB. Second, it has a 4-pin I2C connector instead of a 3-pin debug connector. And third, the BPI-Pico-RP2040 has an RGB LED light. 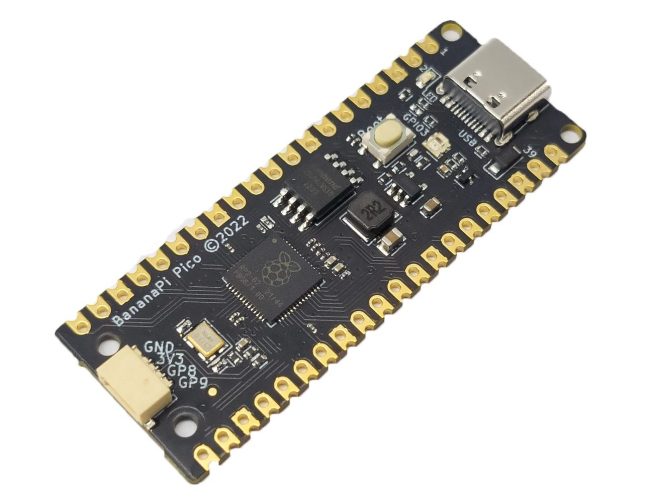 Otherwise, the two boards are nearly identical. The only other significant difference is that the Raspberry Pi Pico measures 51 x 21mm, while the Banana Pi model is a little longer, at 56 x 21mm.

Both devices feature a Raspberry Pi RP2040 133 MHz dual-core ARM Cortex-M0+ microcontroller with 264KB of SRAM and 2MB of flash storage. And both are designed for use in applications such as Internet of Things devices, digital signage, or other DIY or commercial projects.

The Banana Pi model can be programmed using MicroPython or Arduino, and it’s available from AliExpress for $5.26. Since shipping isn’t free, you’ll probably have to pay substantially more than that to get one though. It costs nearly $14 to purchase a BPI-Pico-RP2040 and have it shipped to the US, for example.

Or if you’re looking for something a little different, earlier this year Banana Pi introduced the BPI-PicoW-S3. It has a similar form factor, but it’s powered by a 240 MHz Tensilica LX7 ESP32-S3 dual-core processor with 512KB of RAM, WiFi 4 and Bluetooth 5.

That model is also available for from AliExpress, where it’s currently selling for $5.44 + shipping (which, again, more than doubles the price).