The maker behind the Banana Pi line of single-board computers has introduced a new model with a handful of unusual features that could make it an interesting option for projects involving computer vision, among other things.

The Banana Pi BPI-M6 is a credit card-sized computer that features a SenaryTech SN3680 processor with four ARM Cortex-A73 CPU cores, Imagination GE9920 graphics, a neural processing unit for up to 6.75 TOPS performance, and a Cortex-M3 real-time core. And that’s not the only thing that makes this little computer stand out. 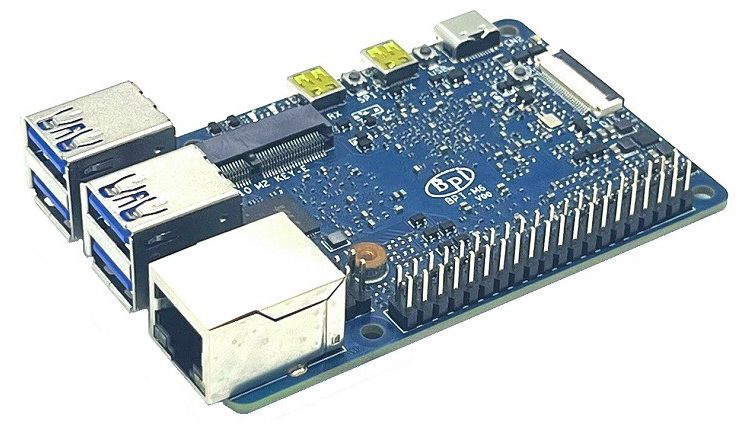 In addition to four USB 3.0 Type-A ports, a USB Type-C port (for power), and an Ethernet jack, the BPI-M6 has two micro HDMI ports: one for output and another for input, which could make this board an interesting option for capturing and processing videos.

It should be able to play 4K video in a range of formats, and it can encode up to two 1080p/60Hz video streams simultaneously using H.264 or VP8 codecs.

The Banana Pi BPI-M6 features 4GB of LPDDR4 memory and at least 16GB of eMMC flash storage. The board also a 40-pin expansion header and an M.2 Key 2232 socket, a MIP-DSI interface, and a microSD card reader.

While there’s no built-in support for wireless, you should be able to add WiFi and/or Bluetooth with a USB dongle. The system is expected to support Android and Linux-based operating systems.

Everything fits together on a board that measures 92 x 60mm (3.6″ x 2.4″), making the little computer just a little larger than a Raspberry Pi Model B.

Pricing and availability details haven’t been announced yet.