If you’re not a fan of single-purpose devices that do silly things like, say, charge your phone, Azpen’s got you covered. The company’s new DockAll Pro line of wireless charging docks for smartphones and tablets are also smart speakers, so you can listen to music, set reminders, or get answers to question while charging your phone.

Of course, you could probably do all of those things on your phone, but I suppose the DockAll devices will work whether your phone is powered on or not.

They don’t come cheap though: Azpen is introducing two new models, and they’re both priced at $150. 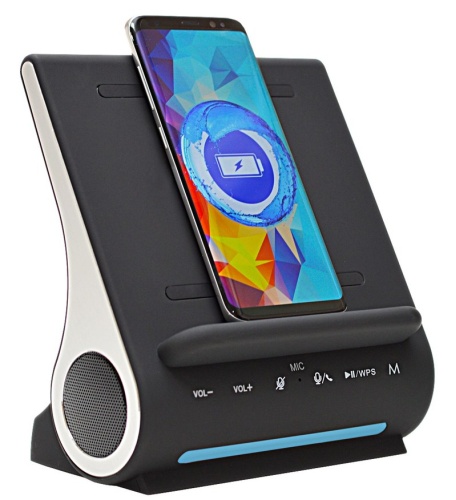 What you get for that price is a docking station that supports 10-watt fast charging via the Qi wireless charging protocol, stereo speakers, a microphone, a stand for your phone or tablet, and capacitive buttons for controlling your phone or music playback.

There’s also an ambient LED and a microSD card slot that you can use to play up to 64GB of music directly from a card.

Azpen will offer a universal model (D310) with two USB ports on the back for devices that don’t support wireless charging and another model (D320) that has an Apple MFi-certified lightning adapter for iPhones, iPod, or iPads as well as two USB port.

Both models should support phones or tablets up to 13 inches tall.

Or you could just spend your money on an Amazon Echo Dot and a standalone wireless charging dock. A two-piece solution will probably take up more space, but it might be cheaper.