Budget tablet maker Azpen is branching out and launching a budget laptop. The Azpen Hybrx features an 11.6 inch, 2.4 pound laptop that will eventually sell for about $140.

But Azpen is launching the Hybrx through a Kickstarter campaign, and offering the notebook to early backers for as little as $69.

There’s just one catch: this isn’t a Windows laptop. It runs Remix OS 2.0. 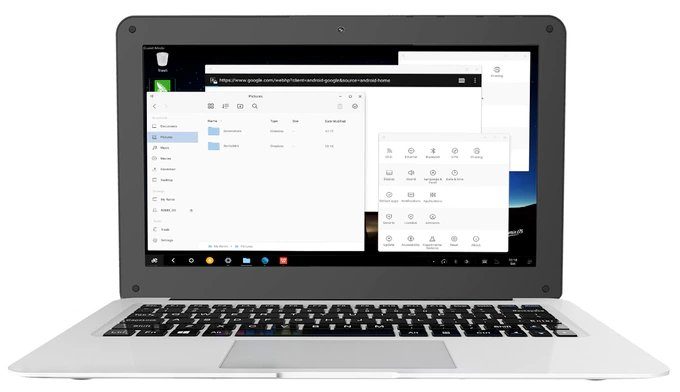 Actually, there might be another catch. Like last year’s Jide Remix Mini desktop computer, the Azpen Hybrx is powered by a quad-core, 64-bit ARM Cortex-A53 processor from Allwinner. The Hybrx laptop is expected to ship with Remix OS 2.0, just like the Remix Mini. But Jide is already getting ready to launch Remix OS 3.0 and it seems like the Remix Mini won’t support it… so it’s possible that the Hybrx won’t either.

Remix OS is a custom version of Android designed to work like a desktop operating system. It’s compatible with most Android apps, but you can run them either in full-screen mode or in smaller windows that can be resized and repositioned anywhere on the screen. There’s Windows-style taskbar and a sort of start button, and a bunch of other tweaks to help Android run smoothly on desktop and laptop-style devices that may not have a touchscreen (the Hybrx doesn’t have one).

If the possible lack of software updates doesn’t scare you off, here are a few other details about the Azpen Hybrix: It has an 11.6 inch, 1366 x 768 pixel display and the entry-level model has just 1GB of RAM and 16GB of storage. But there’s also a model with 2GB of RAM and 32GB of storage and both models have microSD card slots with support for up to 32GB.

Azpen isn’t the first company to introduce a Remix OS laptop. Acer recently unveiled plans to launch one in China, and several other companies already offer models that are available in China. But the Azpen Hybrx might be the frist to be available in the United States.

It’s expected to ship in September.