AYA has been cranking out handheld gaming PCs with x86 chips and Windows software for a few years, and the company has a bunch of new models scheduled to launch in 2023.

But AYA is also planning to launch its first Android game console. The AYA Neo Pocket Air will be compact handheld with a 5.5 inch OLED display, built-in game controllers, and an emphasis on retro gaming.

Detailed specs aren’t available yet, but the company has indicated that the Pocket Air will feature left and right analog sticks, a D-Pad, action button, shoulder buttons, and dedicated function keys. The joysticks and trigger buttons will have hall sensors. And the system has a retro-inspired color scheme with a white body featuring red and tan highlights.

While the Pocket Air will run an Android-based operating system, it will also have an AYA Space launcher which is designed to help you navigate your game collection and adjust settings. 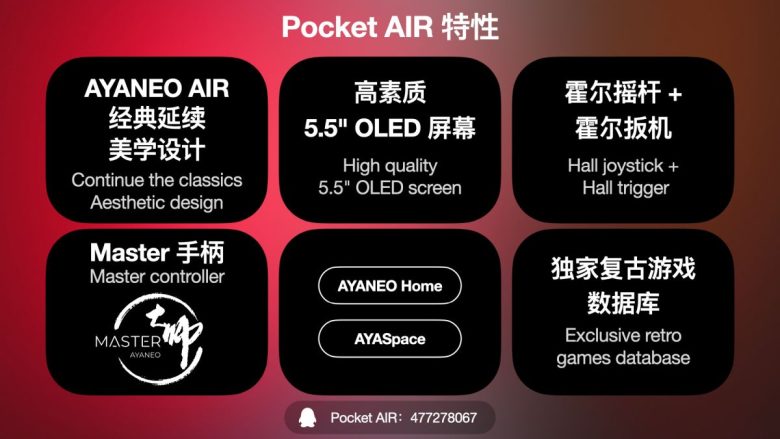 Pricing and detailed specs haven’t been revealed yet, but given that AYA is positioning this as a platform for playing older games, there’s reason to think it might have a mid-range processor rather than the latest flagship specs. But as long as it supports WiFi, it could also provide some competition for the Logitech G Cloud and Razer Edge in the handhelds-for-cloud-gaming space.