Over the past few years we’ve seen so many handheld gaming PCs introduced that it’s hard to find a model with features that truly make it stand out from the competition. But the upcoming AYA Neo Next II has a few.

First, it’s one of the only models to feature a large 8 inch display. Second, it’s the first model I’ve seen from a company other than Valve to feature trackpads for playing games designed for mouse input. And third, it’s expected to offer laptop-class discrete graphics, which would be a first in this space. 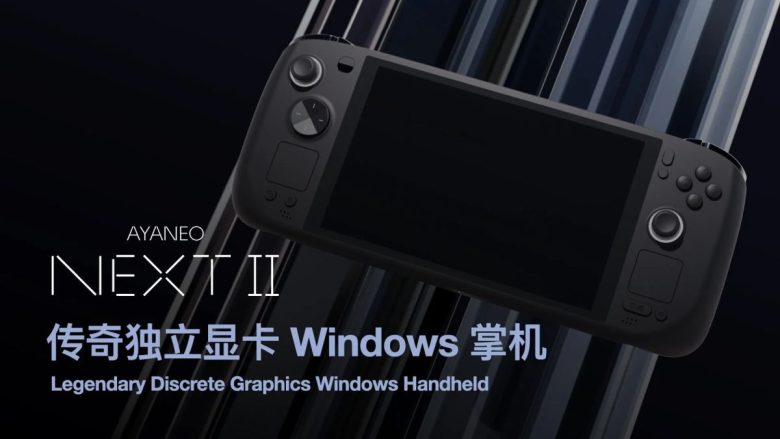 AYA first teased the AYA Neo Next II last summer, but now the company is showing off the latest design and unveiling a few more specs.

The AYA Neo Next II will have an AMD Ryzen 7000 series processor. AYA CEO Arthur Zhang says he can’t specify which chip the handheld will use, but in a message posted to Discord, he strongly implies that it could have an unannounced 15-28 watt Ryzen 7040U processor (which would combine Zen 4 CPU cores and RDNA 3 graphics), although I suppose it’s theoretically possible that the system could have a 35 watt Ryzen 7040HS chip instead.

As for the discrete GPU, there’s no new information about that, other than confirmation that AYA Neo Next II will have discrete graphics, although it’s unclear how much you’d actually need that feature on a system with RDNA 3 integrated graphics.

It’s worth noting that NVIDIA says its recently announced GeForce RTX 40 series laptop-class GPUs can deliver the same performance as a previous-gen RTX 30 series GPU with just one third the power consumption. So the idea of putting discrete graphics in a handheld doesn’t seem quite as far-fetched today as it did half a year ago.

While we’ll probably have to wait a while for additional details about specs and pricing, but we know that the AYA Neo Next II will have an IPS LCD display and ship with Windows software. The latest pictures also give us an idea of what to expect from the design.

The handheld features two analog sticks, a D-Pad, and action buttons on the front, as well as trackpads on each side of the screen and several additional buttons including shoulder triggers.