A few months after announcing plans to release a handheld gaming PC powered by an AMD Renoir processor, the developers of the Aya Neo have unveiled a working prototype.

The hardware design hasn’t been completely finalized, and it’s unclear if or when mass production will begin. But thanks to a series of recent videos, we can see that the company has managed to assemble a functional handheld computer with an AMD Ryzen 5 4500U processor, Radeon Vega 6 graphics, and game controllers surrounding a touchscreen display. 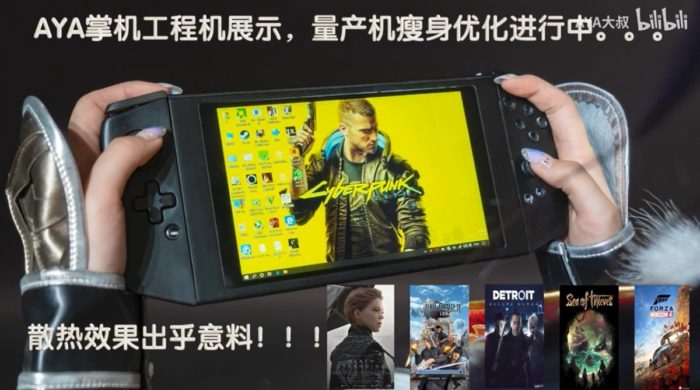 The prototype’s specs include:

The prototype features a single large cooling fan and a copper heat sink on top of the solid state drive, which do seem to do a decent job of keeping the system from overheating — in an video overview, The Phawx notes that CPU temperatures hit around 74 degrees Celsius (165 degrees Fahrenheit) under heavy load.

Meanwhile, a Chinese-language video uploaded to Bilibili shows games including Final Fantasy XV and Detroit: Become Human running at 30 frames per second or better. Sea of Thieves tends to hover closer to 40-45 frames per second, and Forza Horizon 4 hits 60 fps.

The Aya Neo is still probably months away from release. Its makers still need to finalize the PCB and controller designs. But in just a few months, the project has made a lot of progress.

Update: A new video showing a prototype of the Aya Neo running the Horizon Zero Dawn benchmark shows that it averages around 30 frames per second while the CPU consumes about 18 watts. When you factor the power consumption of the display and other components, it’s likely that you’ll get around 90 minutes of battery life while playing this game (or more for less demanding games or non-gaming tasks).